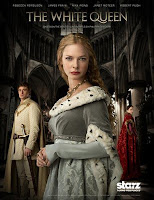 "The White Queen" (BBC, 2011) tells the story of the War of the Roses with a special focus on three women of the time: Elizabeth Woodville, wife of King Edward IV; Anne Neville, wife of King Richard III; and Margaret Beaufort, mother of King Henry VII. However, therein lies a major problem of the show: Trying to tell the story of a good thirty years of rather eventful English history in just ten episodes in bound to feel very rushed. Years are squeezed into seconds and characters change their allegiances faster than their socks (and it doesn't help that the characters don't age visually for the best part of the show).

However, it takes a while until the viewers gets to the interesting and eventful parts of "The White Queen". The first few episodes were considerably weaker than the latter ones. After the first episodes I wondered whether I should continue watching, after the second I was ready to throw in the towel. What kept me watching were the performances of the supporting cast in difference to the rather bland portrayals of King Edward IV and his Queen Elizabeth. The show picked up though after the first few episodes and with a bigger focus on those who only had supporting roles during the beginning: the Earl of Warwick, Jacquetta of Luxembourg, and not just one but both brothers of Edward and their wives... In the end, I quite enjoyed it and I even felt that the portrayals of Edward and Elizabeth got stronger (or I simply just didn't care enough anymore).