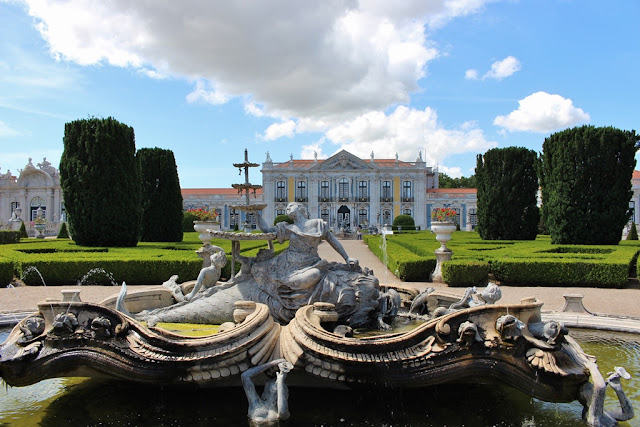 About every country has a palace deemed its Versailles and Portugal's Versailles is the Palácio Nacional de Queluz. Located in Lisbon's suburb by the same name, the palace of Queluz is one of the largest Rococo building complexes in Europe. The palace was designed for the future King Pedro III of Portugal, second son of King João V, by architects Mateus Vicente de Oliveira and Manuel Caetano de Sousa. Works on the palace known today started in 1747. 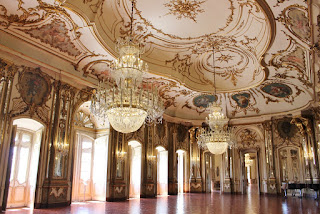 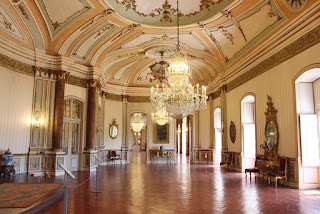 The history of the building, however, began as a hunting lodge, which was owned by the Marquis de Castelo Rodrigo, a diplomat and statesman to Felipe II of Spain, who also ruled as King of Portugal. After Portuguese independence from Spain in 1640, the hunting lodge became part of the royal estate under King João IV. It was set aside as a property for the second son of a monarch and so the aforementioned Dom Pedro inherited the pile of land and building in 1742. Construction on the new palace started five years later. The gardens of the new palace played an important role: The main facade of the new central east wing was turned inwards to face the formal gardens. This way the garden was considered to be an extension of the palace as well as an integral part of it. 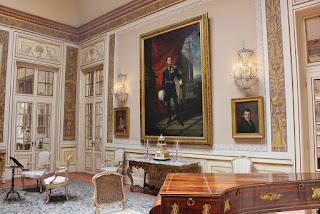 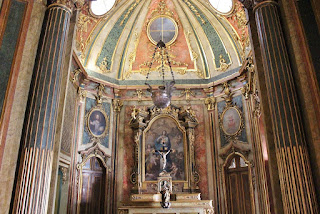 Construction moved rapidly from 1747 until 1755, when they were interrupted by the great earthquake that shook Lisbon and workers were needed elsewhere. Construction resumed three years later. The gardens at Queluz, the Jardim Pênsil and the Jardim Malta, were designed by French architect Jean Baptiste Robillon. From 1758 on, Robillon also designed the west pavilion, which linked the upper formal garden to the park at a lower level with the help of a neo-classical colonnade. He also designed the Stairway of the Lions, where he attempted to bridge the difference of levels by using theatrical architectural effects. 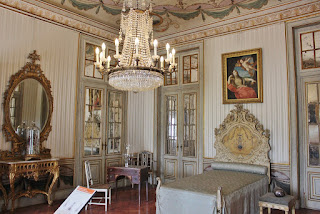 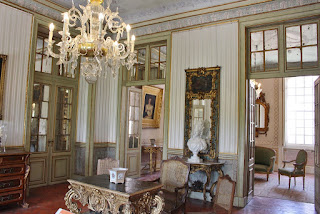 In 1760, Dom Pedro married his niece Maria, who became Queen of Portugal upon the death of her father in 1777. As was Portuguese custom as the couple already had children, Pedro became King Pedro III when his wife succeeded to the throne. Originally intended as the summer residence of the younger brother of a monarch, the Palácio de Queluz was turned into a royal home. The year Maria became Queen, throne and music rooms were newly decorated and a new east wing added to house apartments for Queen Maria I and her attendants. Another wing used by staff and for storage was added in the first decade of the 19th century giving the palace today's outer appearance. 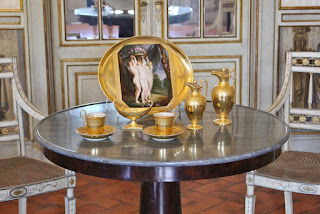 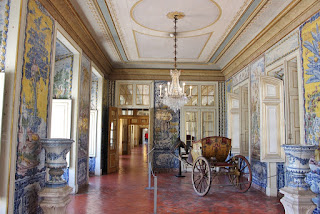 During the time of Queen Maria I and King Pedro III, the Palácio de Queluz was the scene of sophisticated summer festivals. The palace's gardens became the setting for lavish festivities and receptions with theatre performances and elaborate fireworks regularly taking place. Starting in the mid-1780's, the mental state of Queen Maria started to deteriote and she spent much time at Queluz Palace away from the Portuguese court. Her madness worsened after the death of her husband in 1786. Following heavy damages of the Palácio da Ajuda by fire in 1794, Queluz became the new main residence of Maria's son and regent, the future King João VI, and the royal family of Portugal. 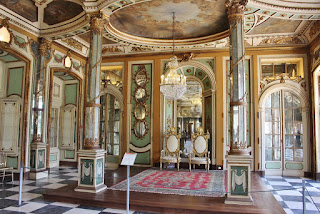 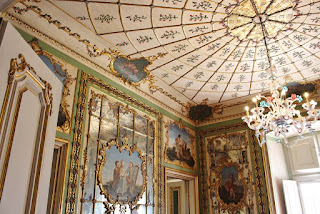 13 years later, in 1807, the Portuguese royal family left the Palácio de Queluz and Portugal for exile in Brazil after the invasion of Napoléon's troops. During their exile, the French made various changes to the palace to suit their needs. The Portuguese royal family only returned from exile in 1820. After their return, Queen Carlotta Joaquina mainly occupied the palace while her husband, King João VI, preferred to live at the Palácio Nacional de Mafra and only visited infrequently. During one of his infrequent visits though he died in the King's Bedroom in 1826. His wife died four years later. While Queluz never again became the main royal residence, it was occasionally used by members of the royal family almost until the end of the monarchy in 1910. 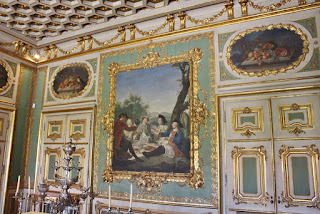 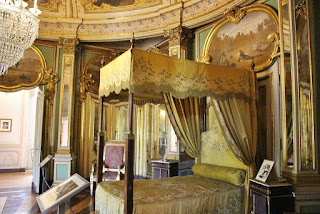 Good to know:
The Palácio Nacional de Queluz is located in the suburbs of Lisbon and open to the general public. It's a relatively quiet spot and thus a great alternative to the very crowded castles and palaces of Sintra. The palace and gardens are open between 9am and 7pm during the summer months with last entrance at 6pm. Admission per adult is about 10 euros. For more information, have a look here.
Bragança Lisbon Region Moura Open Park Portugal