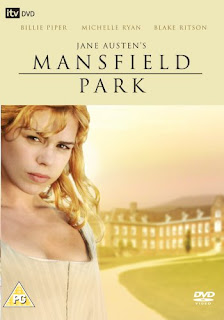 Confession of the day: I have never in my life read a Jane Austen book - and so I won't be able to tell you how true ITV's "Mansfield Park" stays to the original. Considering that it was a TV movie, my guess would be that it isn't (and so I also read). It is one of several on-screen adaptations of the novel and truth be told, I failed to grasp its charm as I found it quite dull. I understand, "Mansfield Park" is a much discussed, love-it-or-hate-it Austen book but I still believe that it must by much better than this 2007 screen adaptation.

"Mansfield Park" tells the story of Fanny Price, played by Billie Paper, who is sent away by her family to live with her rich relations, who make her feel exactly that - that she is the poor relation. Her only friend his her cousin Edmund, a man she desperately falls in love with. He, however, is smitten by a London girl sent to live in the country Mary Crawford, who also likes him but dislikes that he wants to be a clergyman. Mary's brother, Henry, in turn loves Fanny and later has an affair with Edmund's sister married Maria.

It should make for an interesting story but somehow it didn't translate onto the screen of this adaptation. Why one character loved or disliked another one just didn't come across. It did tempt me though to maybe tryout one of the other Mansfield Park adaptations. To the best of my knowledge, there is a 1999 movie and a 1983 mini-series. Recommendations are very much welcome!