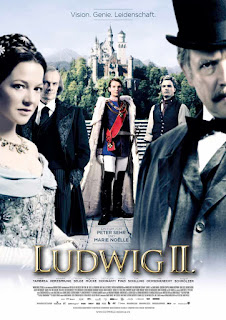 As we've been having King Ludwig II of Bavaria heavy weeks here on Castleholic anyway, I thought I'd share a German movie with you today. Unfortunately, I don't think it's available with English dubbing or subtitles yet I want to recommend this to anyone who speaks German.

There have been numerous cinematisation of the life of the most famous King of Bavaria and one of Germany's best-known monarchs of all times. Ludwig is the swan (or fairytale) king, his castles are tourism magnets. 2012's "Ludwig II" is the latest of them and the first one in 40 years that was allowed to film in the king's actual castles. Out came a good - not a great - film about his life and legacy.

Personally, I felt the film was a bit rushed which is kinda understandable considering that they are trying to cover almost everything from him coming to the throne until his death in a little more than two hours. Yet the relationships that form the man he is - with his mother, his brother Otto, his fiancée for a few weeks Duchess Sophie Charlotte in Bavaria and her sister Empress Elisabeth of Austria - somehow seem a bit lacking. I feel that they would show the real complexities of Ludwig's character. What the film does is offer great views into Ludwig's castles - so in this aspect it's a must for any Castleholic!