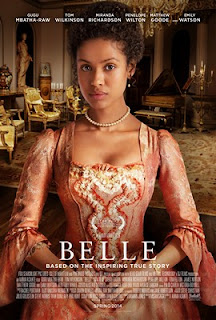 A bi-racial aristocrat in 18th century England - yes, the story of Dido Elizabeth Belle is indeed a true one. Born the daughter of an enslaved Afrian woman and Sir John Lindsay, a British career naval officer, in the West Indies, her father took her to England to be raised and educated by his uncle, William Murray, 1st Earl of Mansfield, who was Lord Chief Justice at the time.

In 2013, a British period drama about the life of Dido called "Belle" was released. I had wanted to watch it for ages and now finally got around to it. "Belle" takes on a lot of topics, it's not just about race but also examines the issues of gender and class - and out comes an emotially engaging drama: I don't think all facts concerning the life of Dido Elizabeth Belle are completely true - yet they make for interesting story of finding one's place in life and society.

Dido's position is too elevated to eat with the servants, yet too lowly to dine (in company, at least) with her "family" that includes a female cousin, a classic English rose at about the same age, who needs a husband to provide for her. Dido, in difference, has inherited money from her father, meaning that she is free to marry who she wants to (or not at all), yet the family of an Aristocratic suitor despises her because of the colour of her skin and the man she loves she cannot marry for he is from a lower class. And to top all of that off, the story of Dido is just a small one within the grander scheme of things: Lord Mansfield, the man who raised her, has to rule on the Zong massacre, the mass murder of 133 enslaved Africans by the crew of the slave ship.