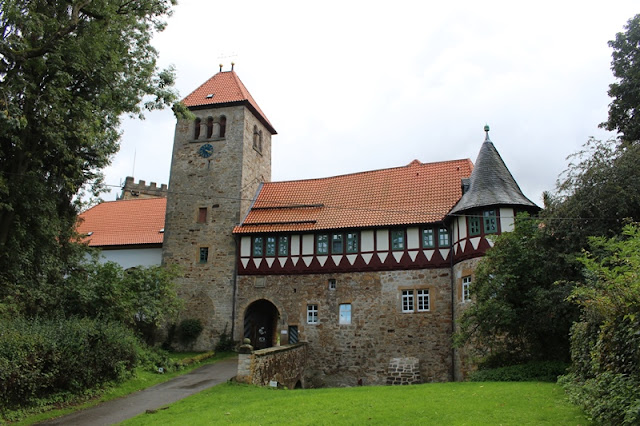 Lo and behold: a new castle for Castleholic! Located on a 218 metres high hill by the same name, Burg Wohldenberg was built as a strategic defensive post. Hard to capture due to the steep hill it stands on and located above two important medieval trading routes, it was originally owned by the Counts of Wöltingerode. The Burg was built between 1153 and 1160 by the counts who had recently come into the possession of land in the area.

While only parts of the castle still remain to this day, it originally consisted of three courtyards. It's most striking feature to this day is a 32 metres high Bergfried tower offering views over the surrouding area. In 1174, it was Count Ludolf I of Wöltingerode who made Burg Wohldenberg his residence after turning his ancestral home in Wöltingerode into a monastery. His descendants started to call themselves after their new home and so the family name evolved via Waldeberch to Wohldenberg. 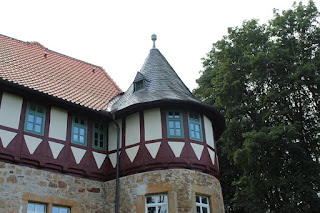 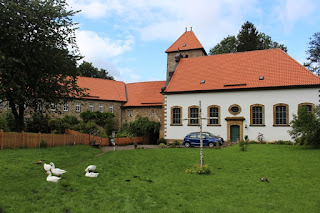 During the dispute between Holy Roman Emperor Friedrich I Barbarossa and Heinrich the Lion, the Wohldenbergs sided with the Emperor and their castle was destroyed in 1180 by Heinrich the Lion's men. Burg Wohldenberg was subsequently rebuilt and the family's influence also grew in the following years. In 1226, Count Hermann was given the Burg Poppenburg about 30 kilometres away as a fiefdom by the Bishop of Hildesheim.

The Wohldenbergs held onto their castle by the same name as well as the whole county until 1275 when they sold it to Bishop Otto I of Hildesheim. In the following years, the castle was at times pledged and enfeoffed though it remained in the hands of the Bishopric for most of the time. Temporarily even robber-knights resided in the Burg. At the beginning of the 14th century, the noble Bortfeld family inhabited the castle for many years. Other inhabitants include Aschwin of Saldern, the Knights of Wallmoden, as well as the Lords of Sehlde, of Linde and of Steinberg. 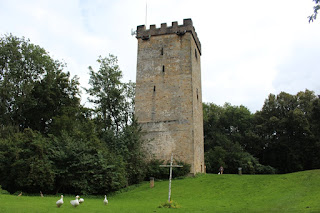 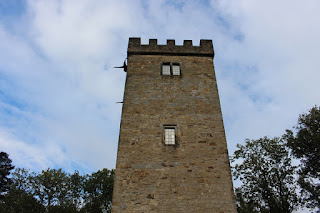 After the end of the Hildesheim Diocesan Feud, a dispute between the Prince-Bishopric of Hildesheim, originally his nobility and later the Guelph principalities of Brunswick-Wolfenbüttel and Calenberg, Burg Wohldenberg fell to the Principality of Brunswick-Wolfenbüttel and its owner, Aschwin of Bortfeld, was forced to leave. During the Thirty Years War, the Burg was heavily damaged by the Imperial Army of the Holy Roman Empire. In 1643, the castle came back into the possession of the Bishops of Hildesheim and a number of Baroque buildings, including a church that stands to this day, were added.

This phase ended with the secularisation in 1802. In the following years, inhabitants of the surrounding villages often times took material from the castle to build new structures in their own villages. Only in 1858, the government in Hanover ordered the restoration of parts of the castle including a viewing platform on the Bergfried  tower. Already six years earlier, a new district office had been built about 200 metres from the castle. Since 1920, that building is owned by the Catholic church. Known as "Wohldenberg House", it is used as a youth-educational institution and meeting place (and you'll probably find hardly any student in Hildesheim that hasn't been there, even the non-Catholic ones).


Good to know:
Burg Wohldenberg and the surrounding area is a nice for a short hike. For those who like to walk up the 132 steps of the Bergfried tower, there are some lovely views of the surrounding area. If I recall correctly, they ask for a little donation when you go up the keep to keep it up. The Baroque church usually is also open on the weekend (well, at least Sundays).
Bishops of Hildesheim Germany Hildesheim Linde Lower Saxony Saldern Sehlde Steinberg Wallmoden Wöltingerode