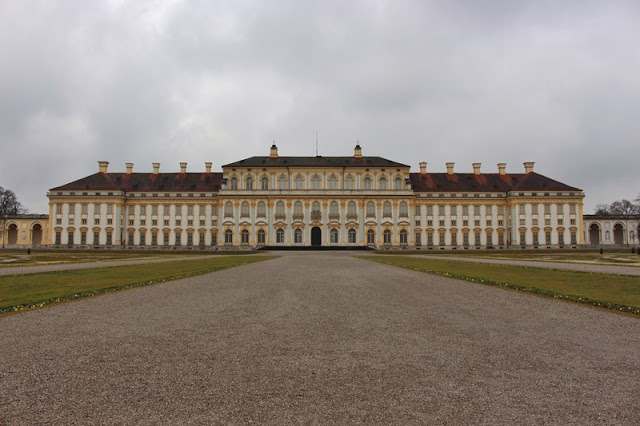 From the old onto the new: the Neues Schloss Schleißheim (as opposed to the Altes Schloss). It was Elector Max Emanuel who commissioned the construction of Schleißheim’s new palace. The Elector of Bavaria wished for a residence that represented his ambition to become the next ruler of the Holy Roman Empire, a position held by the Habsburgs at the time. 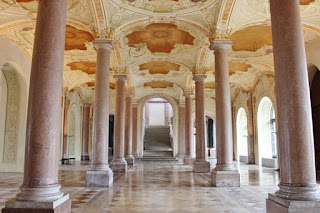 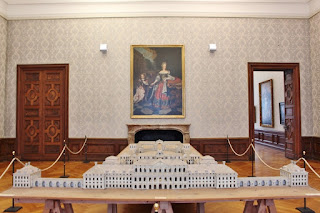 With the wish in mind, the construction began in the winter of 1700/01 under court architect Enrico Zuccalli. However, the Spanish War of Succession ensued and its outcome put a halt to the palace’s construction. In 1704, Max Emanuel was forced into exile after his attempt to supplant the Habsburgs as the Holy Roman Emperors failed. At the time, only the shell of the main wing of an intended four-winged palace stood. 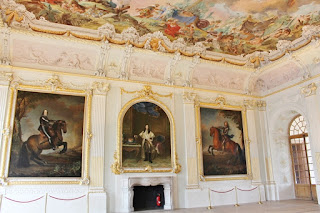 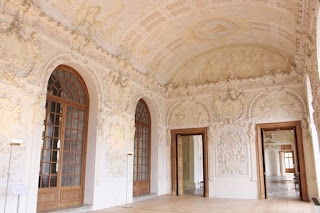 Eleven years later, work on the palace was resumed when Elector Max Emanuel returned from his exile in 1715. However, the financial situation of Bavaria didn’t allow for the original plan, consisting of a cour d'honneur complex with massive side wings, further pavilions and the Old Palace on the west side, and so it was gradually simplified. All that remained of the large-scale plan was the still pretty large main wing, today’s Neues Schloss Schleißheim (or Schleissheim). 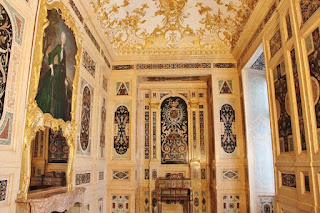 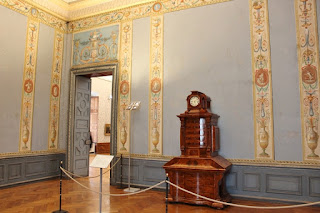 The construction of the palace was overseen by Joseph Effner from the nearby town of Dachau, who had trained in Paris. While there would not be the imperial throne Max Emanuel dreamed of and the financial situation didn’t look too bright, the Elector still did not spare money and the Schloss' interior is imperial in all but name. The great staircase and Great Hall are certainly what every girl’s Cinderella dream is made of. 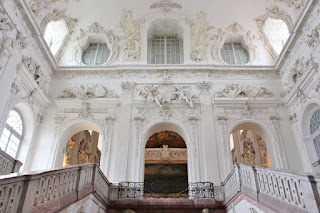 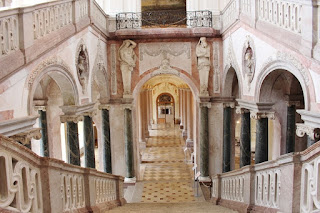 The Neues Schloss Schleißheim is about 300 metres in length. Its highlights include a ceremonial sequence of rooms on the upper floor which begins with the grand Baroque staircase hall, continues with the big halls on the upper floor and culminates in the Large Gallery, my personal favourite of all the rooms. (Generally, the upper floor is the star of the show compared to the ground floor.) 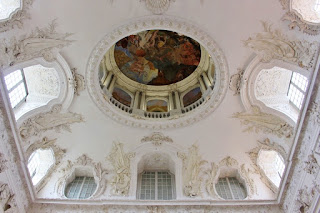 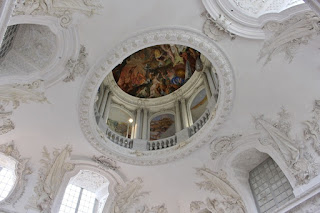 The overall theme of the rooms is Max Emanuel's fame as a triumphant general. The Elector commissioned important artists from Italy, France and Bavaria - such as the sculptors Giuseppe Volpini and Wilhelm de Groff, the stucco-workers Johann Baptist Zimmermann and Charles Dubut and the ornamental metalworker Antoine Motté - to work together to build his dream of a palace. 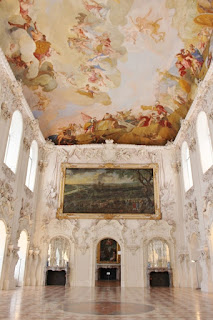 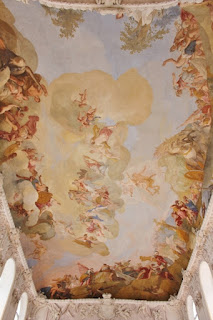 Like so many Baroque-style palaces, the painted ceilings are the star of the show at the New Palace. Elector Max Emanuel first commissioned Bavarian artist Cosmas Damian Asam to do the frescoes. He was later followed by Italian Jacopo Amigoni, who took on the massive job of painting all the ceilings in the two main apartments as well as the ceilings of the two halls on the first floor, the Large Hall and the Victory Hall. For several decades the fresco that covers the entire ceiling of the Large Hall was the largest ceiling painting in the world. 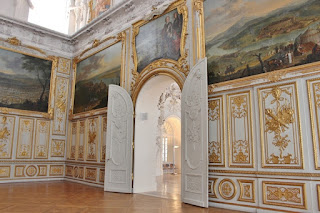 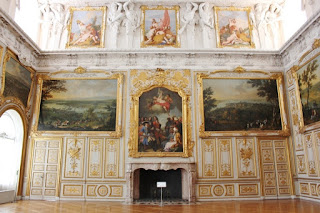 Elector Max Emanuel, however, never saw his palace in all its splendour. He died in February 1726 when it was not yet completed. Many of the rooms were still incomplete and the missing fixtures such as marble fireplaces, wall coverings, panelling and flooring were only gradually installed afterwards by Max Emanuel's son and successor, Karl Albrecht, who preferred Schloss Nymphenburg to his father's palace outside of Munich. 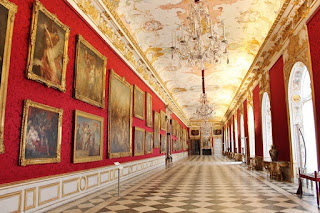 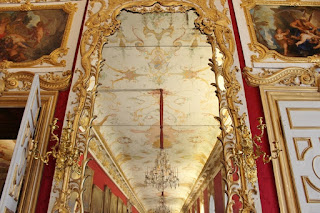 It was Max Emanuel's grandson Max III Joseph, the last elector of the Old Bavarian line of the House of Wittelsbach, who had some of the rooms redecorated in Rococo style. While the guards' hall was turned into a dining hall, he also commissioned two richly carved palace portals from the Bavarian sculptor Ignaz Günther. The grand staircase was only completed under King Ludwig I of Bavaria by court architect Leo von Klenze, who also made some Neo-Classical changes to the facade. 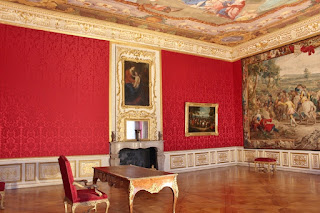 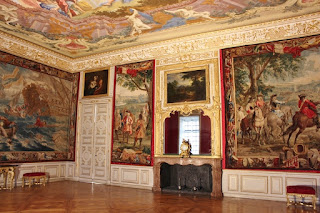 As German air defense was located in Oberschleißheim during the Second World War, it became the municipality in the Munich administrative district that suffered the highest level of destruction and the Neues Schloss wasn't spared. After the Second World War, the palace was reconstructed though Klenze's changes to the facade weren't considered, but instead the original facade restored. 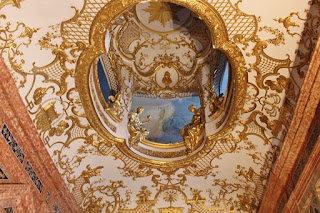 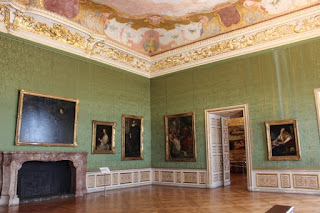 Already by the end of the 18th century, the Neues Schloss was partly open to the public as it housed an important art collection begun by Elector Max Emanuel. And that it also what the palace mostly remains to this day: The Gallery of baroque paintings owned by the Bavarian State Picture Collections is today exhibited in several rooms. Shown are paintings by Flemish, Italian, German and Spanish artists including Rubens and van Dyck.

Good to know:
The three palaces of Schleißheim (Old Palace, New Palace and Schloss Lustheim) are open April to September between 9am to 6pm as well as October to March from 10am to 4pm except for Mondays as well as January 1, Shrove Tuesday, December 24, 25 and 31. Admission for the Neues Schloss is 4,50 euros (or you can spring for the combination ticket, which is 8 euros). If you are staying in Munich for a few days longer or you are visiting for a second or third time, the New Palace should definetely be on your list of royal sights to see. Oberschleißheim is only 20 minutes by train from Munich central station. For more information, have a look here.
Bavaria Germany Munich Open Park Wittelsbach