Time to catch up on my recent castleseeing adventures (and I hope that one of these days, we will also be able to catch up on the not-so-recent-anymore ones). The Altes Schloss Schleißheim is the least spectacular one of the three palaces located in Oberschleißheim (or Oberschleissheim), just north of Munich. The origins of the palace go back to a simple manor house built by Duke Wilhelm V of Bavaria around the year 1598. The purpose of the manor house was to be a place of reflection and prayer for the later years of the Duke. Oberscheißheim is located not too far from Schloss Dachau, at the time the summer residence of the Wittelsbach family.

Already Wilhelm's son Maximilian I decided to demolish the building in favour of a new palace who would be modelled after Andrea Palladino's ideas for Italian mansions to be found in the architectural tract of Vincenzo Scamozzi. Construction of what today is known as the Altes Schloss (Old Palace) started in 1617. Within six years master builder Heinrich Schön finished the palace in late Renaissance-style featuring mural paintings, stucco and frescoes by Dutchman Peter Candid. 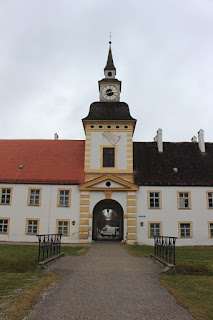 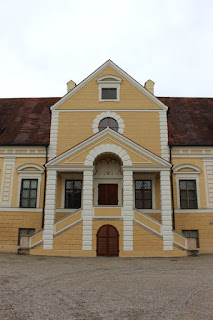 In 1679, Elector Ferdinand Maria died at the Old Palace. His son Max Emanuel, about who we are going to hear a lot more in upcoming Schleißheim-posts, planned to incorporate the Altes Schloss into a new, large palace complex but his plans were never fully carried out. After the construction of the New Palace, however, the old one was used less and less by the Wittelsbach family. During the 19th century parts of it were used by the local parish.

The Second World War took its toll on the Altes Schloss Schleißheim like it did on so many German castles and palaces (and all other buildings). The palace was heavily damaged during air raids and reconstruction didn't start until 1970 after it had laid in ruins for 25 years. Like it happens every so often, the exterior of the palace was recontructed according to old plans but much of the interior wasn't. The Altes Schloss today houses two museums. While the one about regional and cultural studies of East and West Prussia does feature rooms with some old elements, the one about modern religious folk art from all over the world is located in rooms with no reminders of the royal past of the Altes Schloss. The middle hall with its original west wall, however, was reconstructed in every detail.

Good to know:
The three palaces of Schleißheim (Old Palace, New Palace and Schloss Lustheim) are open April to September between 9am to 6pm as well as October to March from 10am to 4pm except for Mondays as well as January 1, Shrove Tuesday, December 24, 25 and 31. Admission for the Altes Schloss is 3 euros though I recommend the combination ticket for 8 euros. Truth be told: If you are not overly into regional and cultural studies of East and West Prussia or religious folk art, it's the one of the three palaces I'd least recommend to visit. For more information, have a look here.
Bavaria Germany Munich Open Park Wittelsbach