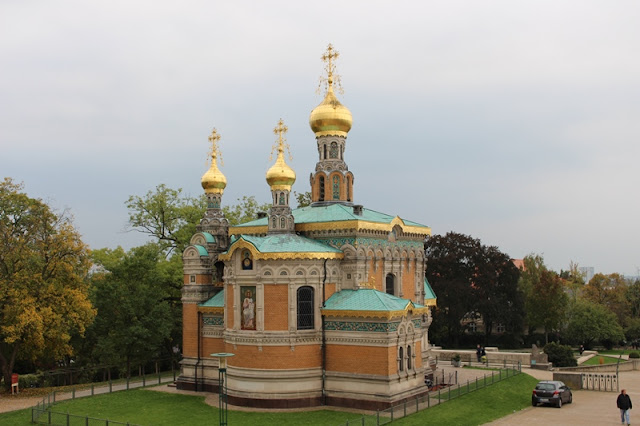 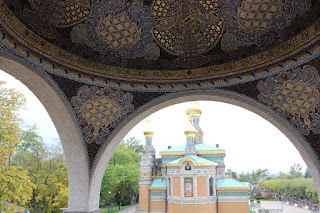 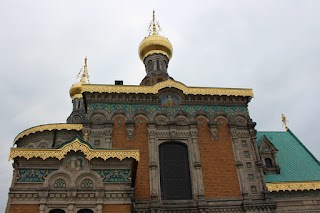 Inspired by Russian churches of the 16th century, the chapel was built according to plans by Russian architect Leon Benois between 1897 and 1899 for Tsar Nicholas II and his family. Tsar Nicholas' wife, Alexandra Feodorovna, had been born in Darmstadt as Princess Alix of Hesse and by Rhine. And so the couple frequently travelled to Darmstadt to visit family and thus needed a place of worship. But before construction could start, both Russian stone as well as Russian soil from all over the Tsarist empire had to be brought to Darmstadt. 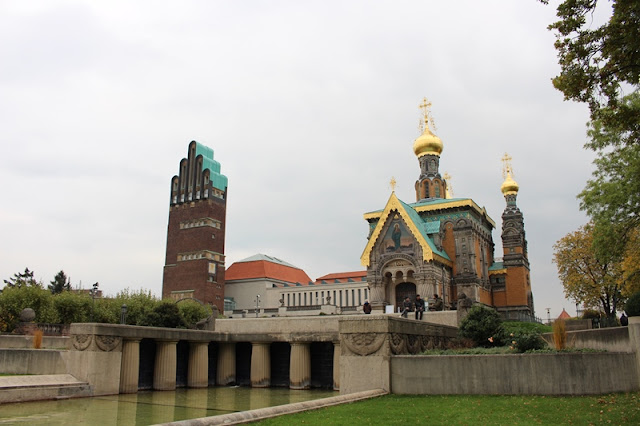 The church's first stone was laid on October 16, 1897, in the presence of the Tsar and Tsarina. It is located on the Mathildenhöhe heights, a quarter of Darmstadt which later became famous for the Darmstadt Artists' Colony, a group of Jugendstil artists who both lived and worked there. While the marble for the construction of the church was imported from Russia, the tiles on both the facade and roof were manufactured by Villeroy & Boch. The overall designs imitates that of 16th century Russian orthodox churches. 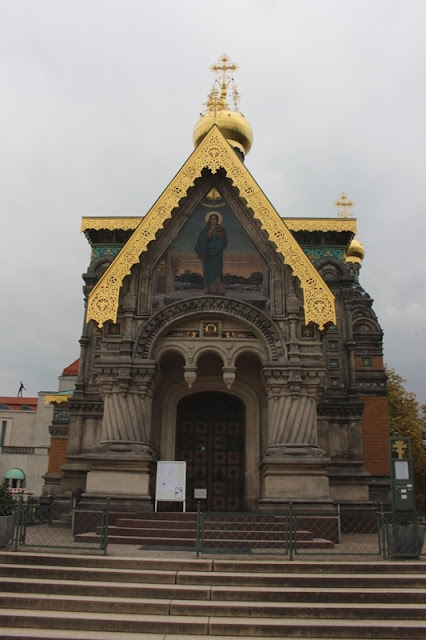 Built on the personal funds of the Emperor, Darmstadt's chapel was dedicated to St. Mary Magdalene, Equal-to-the-Apostles and patron saint of the mother of Emperor Nicholas II. Its exterior is adorned by mosaic icons of the heavenly patrons of the Tsar’s family, including St. Nicholas, St. Alexander Nevsky, the parents of John the Baptist, Elizabeth and Zechariah and more. Over the entrance is an image of St. Olga, Equal-to-the-Apostles, patron saint of the eldest daughter of Emperor Nicholas II and Empress Alexandra Feodorovna. 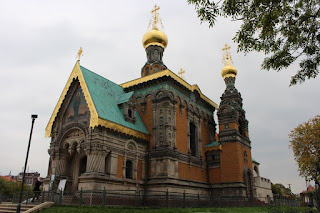 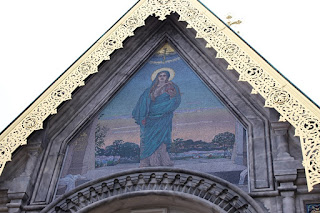 The church's interior is rather unusually decorated: There are only few frescoes or icons. Meanwhile, a mosaic of the Mother of God is located above the altar. While the sketches were drawn up by artist Victor Vasnetsov, the mosaics were crafted by the Frolov brothers. The iconostasis was imported from London and originally used in the private church of Grand Duchess Maria Alexandrovna, Duchess of Saxe-Coburg and Gotha. It consists of only one row and was painted in oil, a popular method of the period, by Karl Neff. The walls are adorned by stylised lilies, a kind of flowers particularly loved by Empress Alexandra Feodorovna. The splendor of Eden was an inspiration for the church's decoration and so there are many vines featured throughout.


Good to know:
The Russian Orthodox Church of St. Mary Magdalene in Darmstadt is open Tuesdays to Saturdays between 10am to 4pm (with a break between 1pm and 2pm) and on Sundays from 2pm until 4pm.
Church Darmstadt Germany Hesse (state) Open Romanov