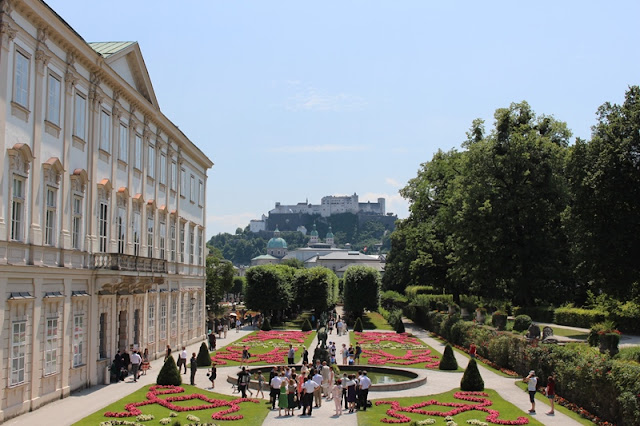 The view from Mirabell Gardens towards the Festung Hohensalzburg stronghold with Schloss Mirabell on the left might just be the most famous one of all of Salzburg. The city's Altstadt (old town), which is considered one of the best-preserved city centres north of the Alps, including Schloss Mirabell and its gardens became a UNESCO World Heritage Site in 1997.

The masterpiece that is Mirabell palace was initially built as Schloss Altenau under the reign of Prince-Archbishop Wolf Dietrich of Raitenau in 1606. It was a present for his mistress Salome Alt. Together the couple had 15 children and while the Prince-Archbishop's children were actually legtitimised by the Emperor and they and his mistress given hereditary noble titles, this helped little when Raitenau was deposed and arrested in 1612. 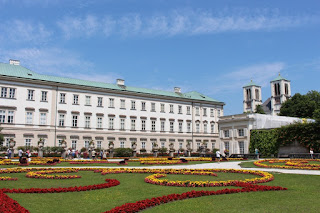 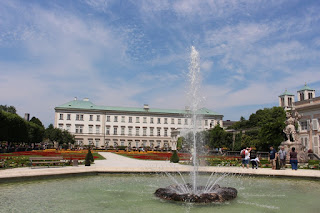 Raitenau's nephew and successor, Markus Sittikus of Hohenems, soon expelled Salome and her children from Schloss Altenau and renamed it Schloss Mirabell. For the most part of his tenure as Prince-Archbishop, Markus Sittikus, however, shuned the palace. His successor Paris of Lodron, in difference, lived in the Schloss and had Salzburg's new city fortification during the Thirty Years' War include the palace even though it lay on the opposite side of the Salzach river than most of the rest of the old town.

Schloss Mirabell received its Baroque design between 1721 and 1727 when Prince-Archbishop Franz Anton of Harrach rebuilt the palace more or less from scratch following plans by famous architect Johann Lukas von Hildebrandt. The palace's magnificent Baroque appearance was sadly destroyed during a town fire in 1818. A number of frescoes including those by Johann Michael Rottmayr and Gaetano Fanti also fell victim to the flames. The grand marble staircase that led into the palace and the marble hall luckily survived unscathed. 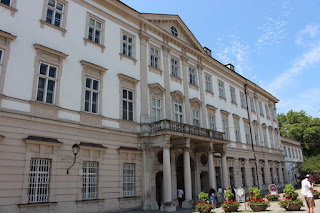 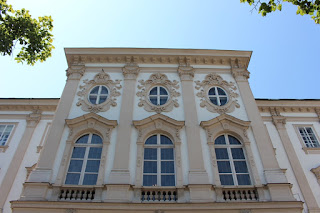 The damaged parts of Schloss Mirabell were then rebuilt in its present neoclassical appearance according to plans by Johann Georg von Hagenauer by Peter de Nobile, the Habsburg court's architectural consultant and director of the Vienna School of Architecture. Details such as the edging of the windows, the capitals and stuccowork still bear witness to the palace's former Baroque splendour.

Famous inhabitants of Schloss Mirabell include the future King Ludwig I of Bavaria, whose son Otto, future King of Greece, was born there in 1815. One year later, Salzburg became "Austrian" again and Mirabell palace the summer residence of the Habsburg emperors. Also Archbishop Cardinal Maximilian Josef von Tarnóczy lived in the palace for 12 years, from 1851 to 1863. In 1866, the Schloss came into the possession of the city of Salzburg after the Emperor had gifted the gardens to the city two years earlier. 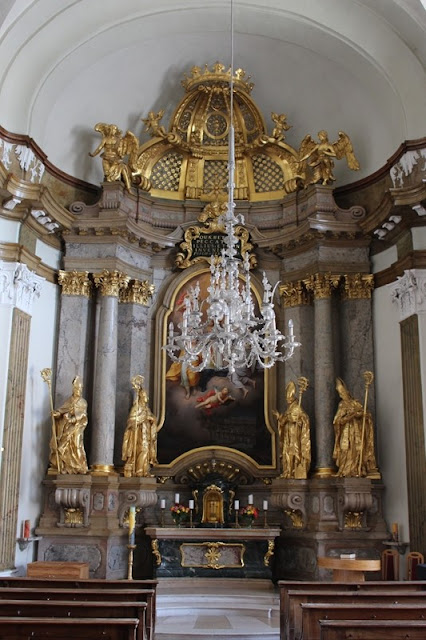 Good to know:
These days Schloss Mirabell accommodates the office of Salzburg's mayor and the municipal administration; it also is a popular spot for getting married - when I visited, I saw about ten couples who tied the knot having their pictures taken in the gardens. The marble hall is the only part of the palace that can be visited on Mondays, Wednesdays and Thursdays from 8am to 4pm as well as on Tuesdays and Fridays from 1pm to 4pm. Sadly, I visited on a Saturday. The palace's church is also open but not accessible from the side of the gardens, which are open all year round.
Archbishops of Salzburg Austria Habsburg Harrach Hohenems Lodron Raitenau Salzburg (land) Tarnoczy Wittelsbach