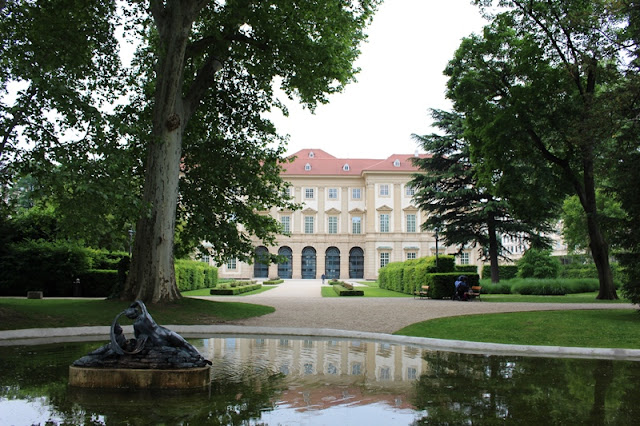 Still owned by the Princely Family of Liechtenstein today, the Gartenpalais was built by Prince Johann Adam Andreas (or Hans-Adam) I of Liechtenstein. In 1687, he had bought land from the Auersperg family outside of the city walls of Vienna to develop Lichtenthal, one of the rare examples of large-scale Baroque urban planning in the Austrian capital including not one but two palaces for the Liechtenstein family. 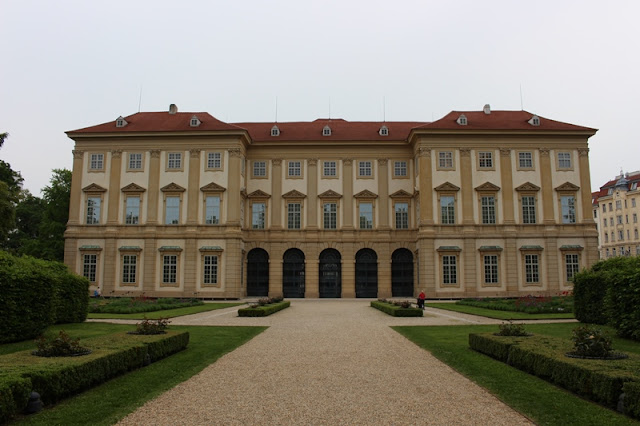 The Gartenpalais, solely used for balls and other celebrations and thus without any rooms to actually live in, was built according to plans by Domenico Egidio Rossi, which were carried out by Luccanese architect Domenico Martinelli starting in 1692. Prince Hans-Adam I had both a preference for Italian architecture as well as Italian architects and so he also wanted to commission Italian painters to decorate the palace's interior. His favourite was Marcantonio Franceschini but he could not be convinced to travel to Vienna due to the cold climate.

In the end, an Austrian from Salzburg, Johann Michael Rottmayr, got the job. The first notable Baroque painter north of Italy created the fresco cycles in all areas of the ground floor as well as the two staircases starting in 1705. However following water damage, these frescos were covered up by stucco-framed oil paintings of Antonio Bellucci during the 19th century and only rediscovered and subsequently reconstructed during the early 2000's. (Fun fact: The Bellucci paintings had gun holes in them as the Gartenpalais had suffered water damages and one could not think of an easier and quicker way to relieve the ceiling from the water.) 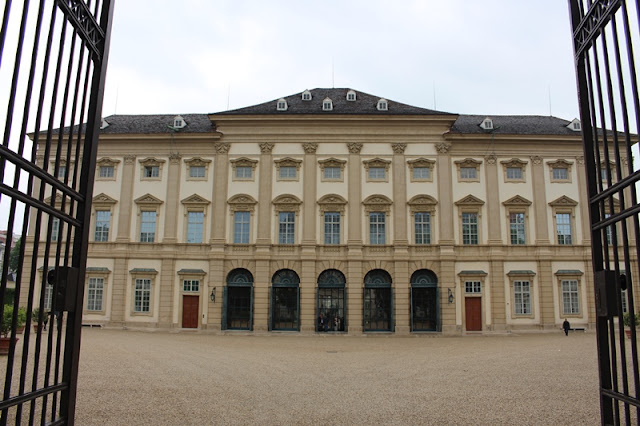 While the Prince could not convince Marcantonio Franceschini to come to Vienna, there are several oil paintings by the Italian artist that were integrated into the ceiling panels of several rooms. Also, renowned stuccoer Santino Bussi created rich decorations throughout the entire Gartenpalais. The palace's biggest - and most stunning - room, the Herkulessaal (Hercules Hall), was designed by Baroque painter Andrea Pozzo and includes a monumental ceiling fresco depicting 'The Admittance of Hercules to Olympus'. The sculptures throughout the palace were created by Giovanni Guiliani.

During the following centuries, Prince Johann Adam I's Baroque ensemble underwent several changes. During the late 18th century, the entrance portal, which was integrated into the semi-circled stables, was changed into a classical triumphal arch by court architect Joseph Hardtmuth. In 1814, Harthmuth's successor as court architect, Joseph Kornhäusel, had the arch as well as the stables torn down and added the still existing fence thus opening the previously closed ensemble to an outsider's view. 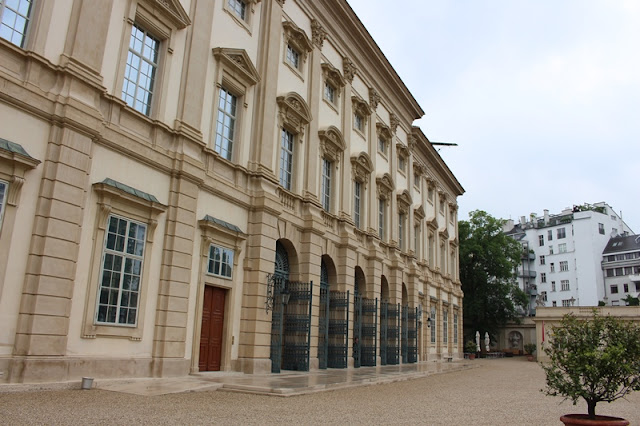 While the Gartenpalais had previously been used privately, Prince Johann I decided that paintings and other works of art owned by the Princely Family should be brought together and exhibited to the general public at the palace. In 1807, the museum was opened. However, various changes were made to the palace prior to the opening to accomodate the museum: For example, some windows were walled up to allow pictures to be hung on the walls instead. In addition, four of the five doors between the Hercules Hall and the Great Gallery were closed to make room for Rubens' Decius Mus Cycle and, as previously mentioned, the Rottmayr frescos were covered up to exhibit paintings by Belluci which originally belonged to the Stadtpalais.


At the time of the museum opening, the Herkulessaal was classically decorated, however, at the beginning of the 20th century, these changes undone and some neo-Baroque decorations like stucco panels and fireplaces added. Five Franceschini paintings were hung on the inner longitudinal wall and the walls of the gallery rooms were painted in shades of blue and green. 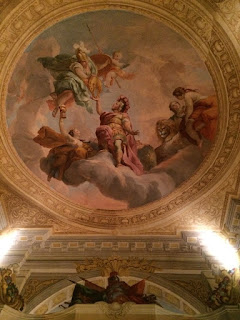 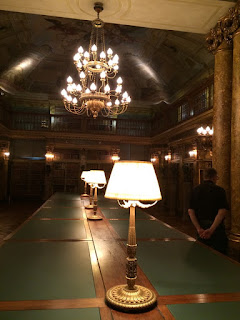 Towards the end of the 19th century, the five open round arches of the Sala Terrena hall on the ground floor were glazed to preserve the interior which had previously been subjected to the weather conditions. In 1897, an elevator was added to bring the visitors to the second floor. Between 1912 and 1914, the princely library containing some 100,000 books from the 15th to 19th century was brought to the Gartenpalais.

In 1938, after the Anschluss of Austria into Nazi-Germany, the Princely Family moved their main residence from Vienna to Liechtenstein and the Gartenpalais was closed. Luckily, they were able to bring their art collection to the Principality prior to the end of the Second World War so nothing was destroyed. Between 1957 and 1978, the palace was home to the Österreichisches Bauzentrum museum. Subsequently, the Museum of Modern Art Foundation Ludwig Vienna moved in until 2000. 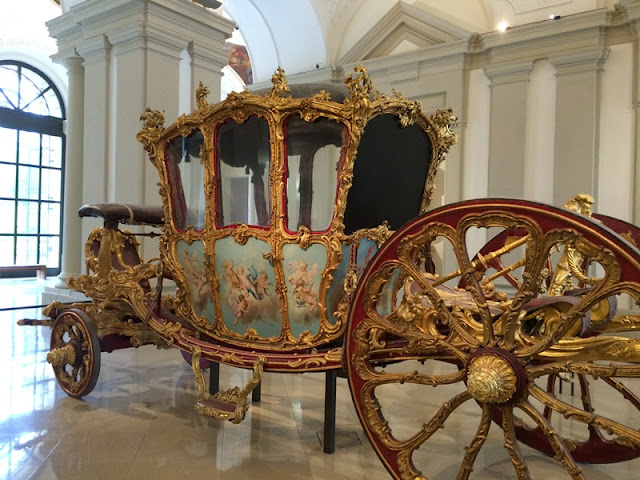 Starting in 2001, the Gartenpalais was thoroughly renovated to fulfill all fire prevention, security and air-conditioning requirements for a modern museum which was to be opened at the palace once again. During the renovations, which cost around 25 million euros paid for by the Liechtenstein princely family, several changes to the palace from previous centuries were undone to create a harmonious whole. After three years of work, the Gartenpalais was re-opened as a museum for the Princely Collection of the House of Liechtenstein including the Golden Carriage of Prince Joseph Wenzel in 2004.


Good to know:
After disappointing numbers of visitors also due to the fact that the palace is located a outside of the usual flow of Vienna tourists, the museum was closed in 2011. Since 2012, the Gartenpalais can be rented as a venue for all kinds events such as gala dinners, weddings, concerts and more. It can still be visited as a museum but only once a month during a guided tour. The tours have to be prebooked and cost 20 euros per person (or 38 euros in combination with the Stadtpalais). It's definetely not cheap but if you are interested in art and architecture, still very much worth it. The tours of the Liechtenstein palaces were the best ones I ever had (and probably ever have).