May 24, 2015
The fifth day of my Vienna vacation actually led me out of Vienna as I headed west to Schloss Artstetten, home of the Hohenberg family, and Melk Abbey, as well as south to... well, simply read on. And keeping with last night's theme - also the reason why I'm only posting this morning while recovering from the madness that is the Eurovision Song Contest - I'll give out points. 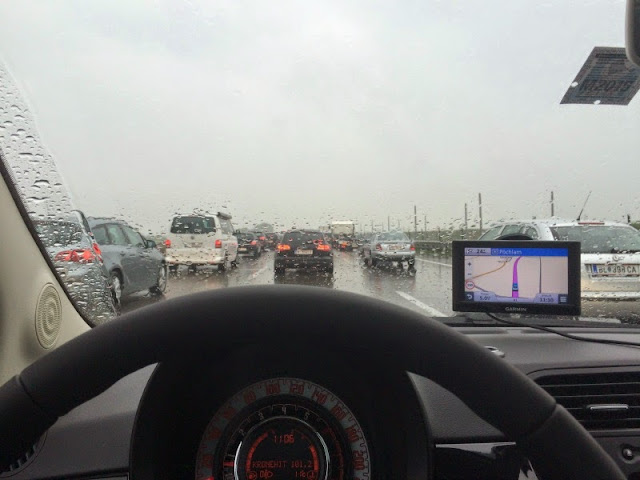 So, turns out Austrian traffic jams aren't any more fun than German - or any country's, I suppose - traffic jams. It cost us about one and a half hours. Zero points. 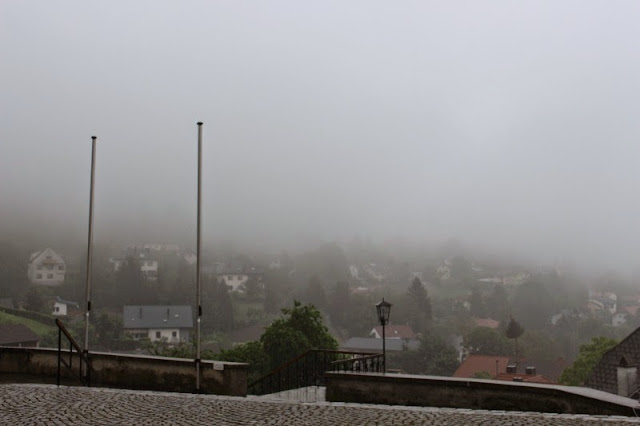 And the weather wasn't really great either, very foggy and rain throughout the whole day. At least it wasn't as windy as on some of the days before. Two points. Still, we tried to make the best of it and had a fun day discovering all kinds of different sights. First off was Schloss Artstetten, most famously the home of Archduke Franz Ferdinand and his wife Sophie, whose murder in Sarajevo in 1914 sparked World War I. Today, the castle is owned by their great-granddaughter Princess Anita of Hohenberg, whose mother was a born princess of Luxembourg, by the way. 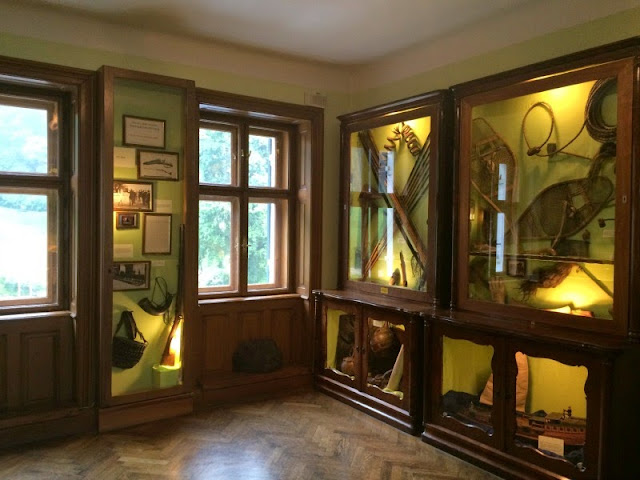 I must say that I didn't really know what to expect of the museum but I enjoyed it very much. So much of Habsburg history here in Vienna is based around Emperor Franz Joseph and even more his wife, the immortal Sisi, and this museum in Artstetten gave a great insight into another part of the family; not just Franz Ferdinand per se but also touching on his immediate family and some of his relatives. 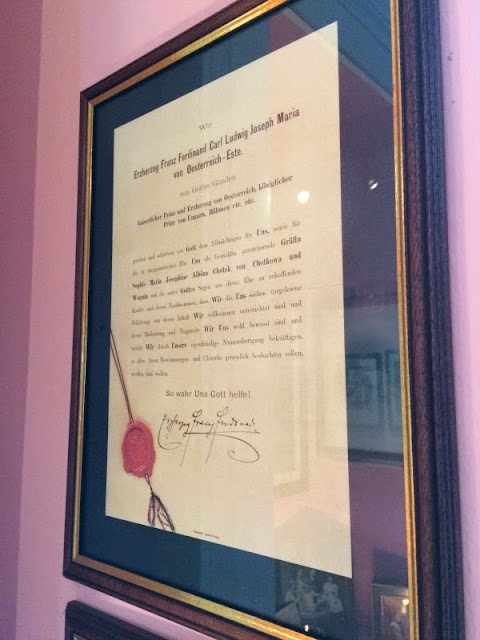 The museum features many personal touches like a letter from Otto von Habsburg, Austria's last crown prince who lived in exile for decades, informing his cousin Duke Max of Hohenberg, son of Franz Ferdinand, about his engagement to Princess Regina of Saxe-Meiningen asking him not to tell it to anyone but his brother as it wasn't official yet. Also among the exhibits was the document in which Archduke Franz Ferdinand renounced the rights of his descendants to the Austrian throne after his morganatic marriage to Countess Sophie Chotek. 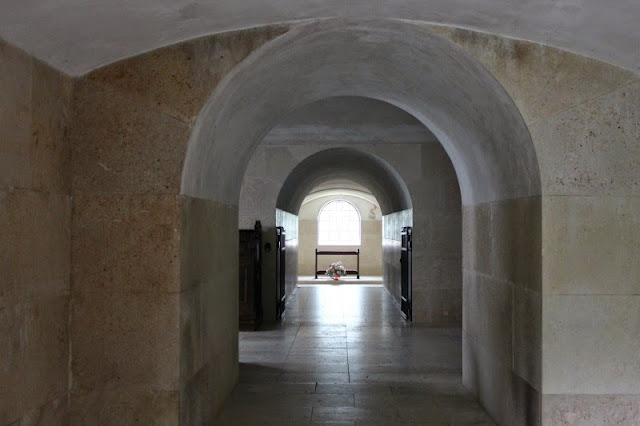 You can also visit the crypt that is the last resting place of Archduke Franz Ferdinand and Duchess Sophie... 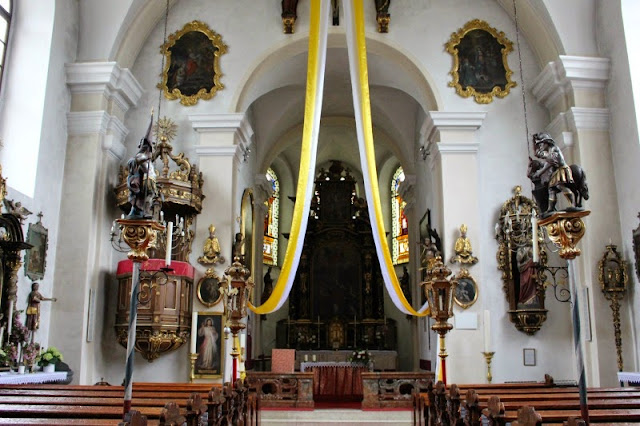 ...as well as the church of the castle. 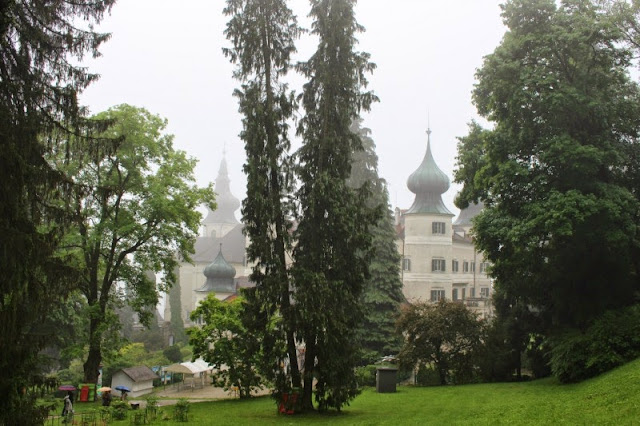 All in all, my twelve points of the day go to Schloss Artstetten. 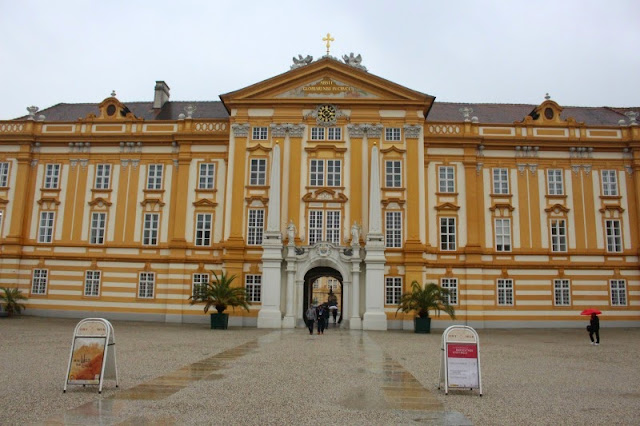 From Artstetten, we made our way to nearby Melk, home of Stift Melk, the world famous and stunningly beautiful Benedictine abbey overlooking the Danube river about 80 kilometres west of Vienna. 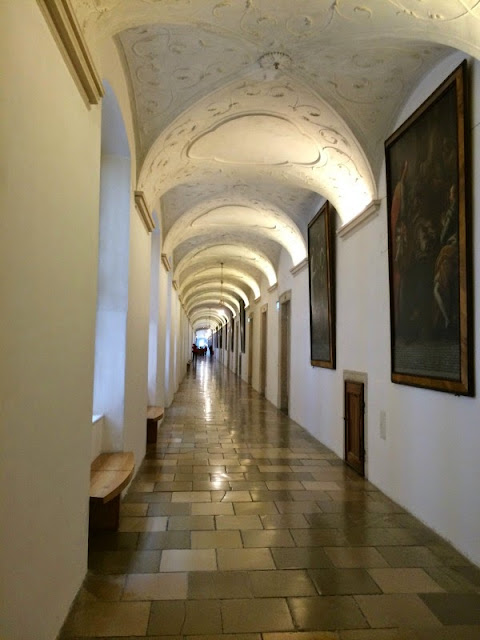 Today's Baroque abbey was built between 1702 and 1736 and also features imperial rooms for the Habsburg family to stay in whenever they visited Melk. Above is the hallway of these imperial rooms (and no, the hallway doesn't end where you see the people, that's only half way.) 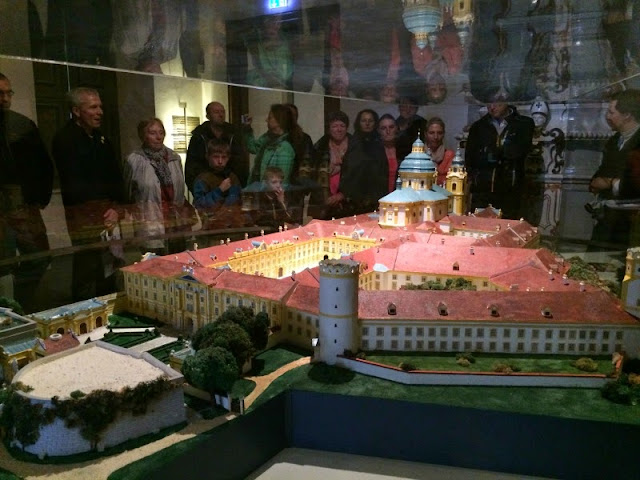 The whole abbey has 1365 windows and today is home to a monastery, a school, a museum, and more. 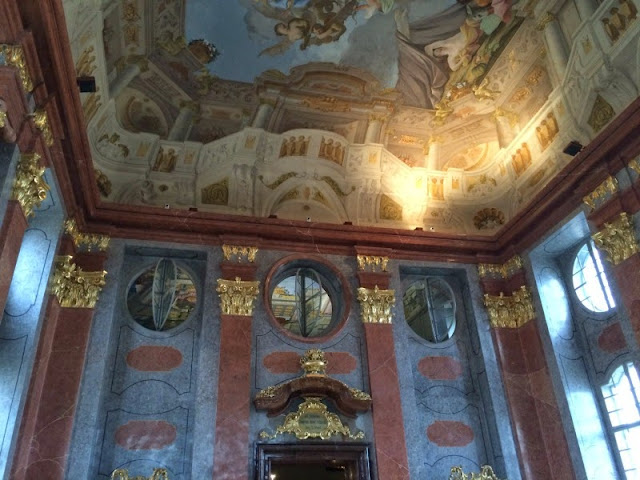 Like seemingly every important Baroque building, the Stift includes a Marble Hall... 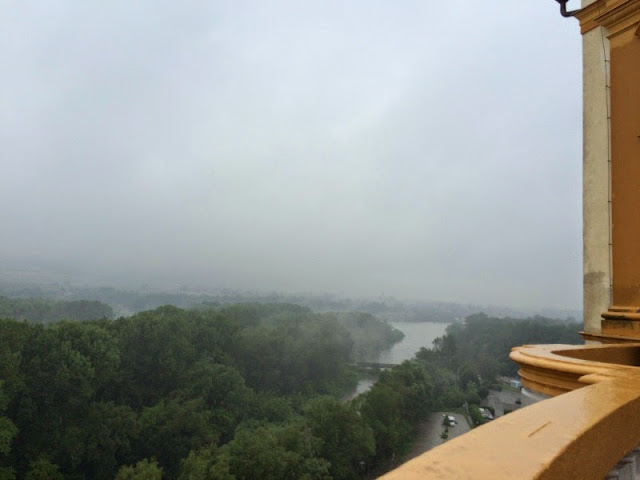 ...but also offers great views over the Danube valley and the Wachau region. (Well, at least when it's not rainy and foggy, I assume.) 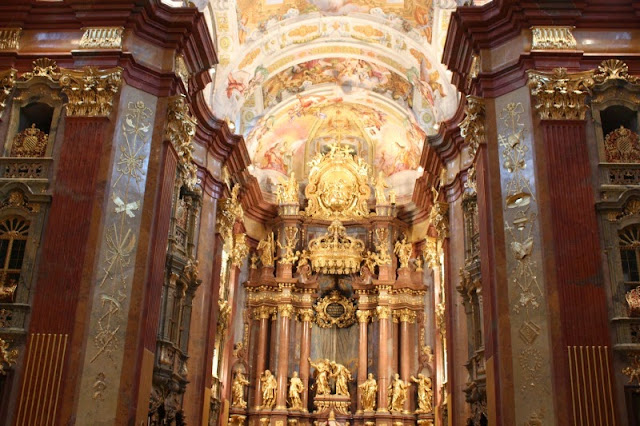 The highlights of any visit include the Baroque church as well as the famous library (though you aren't allowed to take pictures of the latter). The library consists of twelve rooms containing about 1,888 manuscripts, 750 incunabula (printed works before 1500), 1,700 works from the 16th, 4,500 from the 17th, and 18,000 from the 18th century; together with the newer books, approximately 100,000 volumes in total. 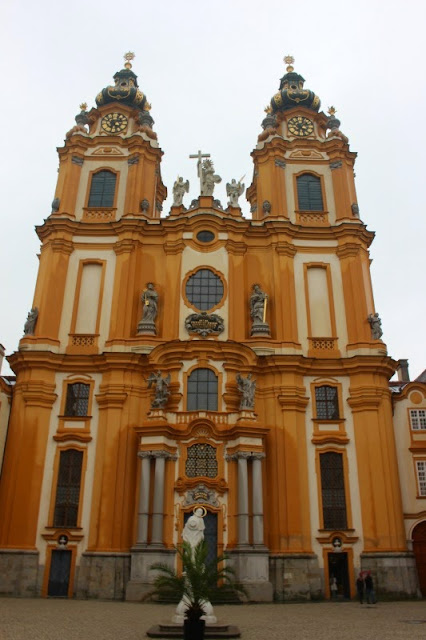 While the abbey is certainly very much worth a visit, I wasn't too impressed by the way the tour was offered. They have a very modern museum in the imperial rooms but you hardly had any time to view the exhibits. While it got a little better later on, it all felt very rushed. On average: Ten points. 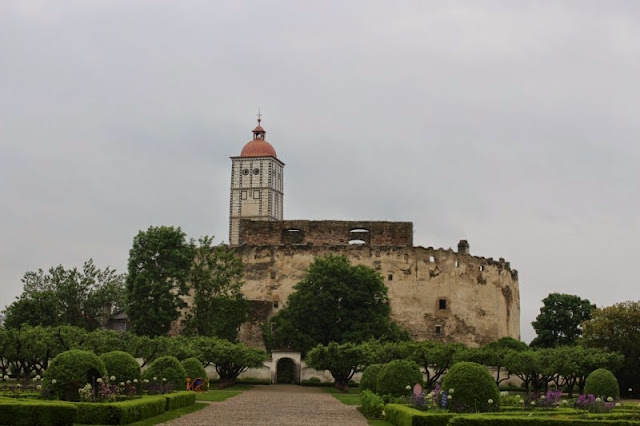 Then we slowly made our way back to Vienna stopping by a few other sights. First off: Schloss Schallaburg, one of the best known Renaissance-style castles in Austria. 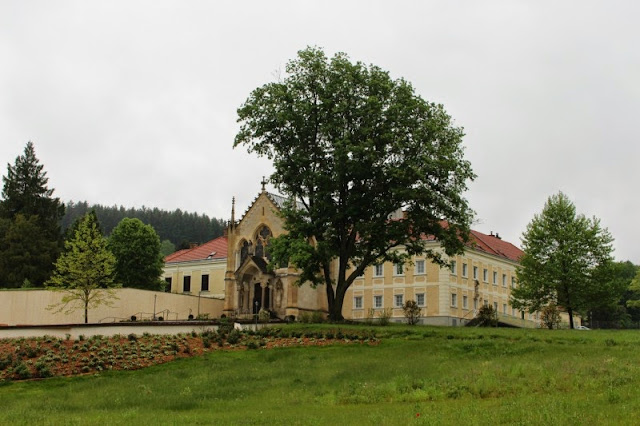 Schloss Mayerling, the hunting lodge were Crown Prince Rudolf and his mistress Baroness Mary Vetsera committed suicide. After their deaths, Emperor Franz Joseph turned the castle into a convent. Due to the advanced hour of the day, it was already closed to visitors... 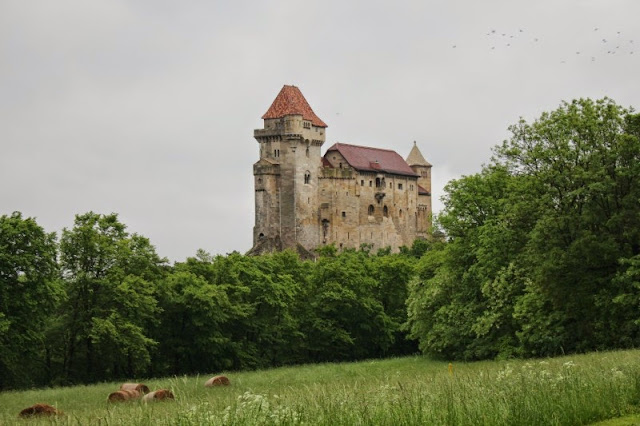 ...as was Burg Liechtenstein, the ancestral home of the Princely Family of Liechtenstein in Maria Enzersdorf south of Vienna. 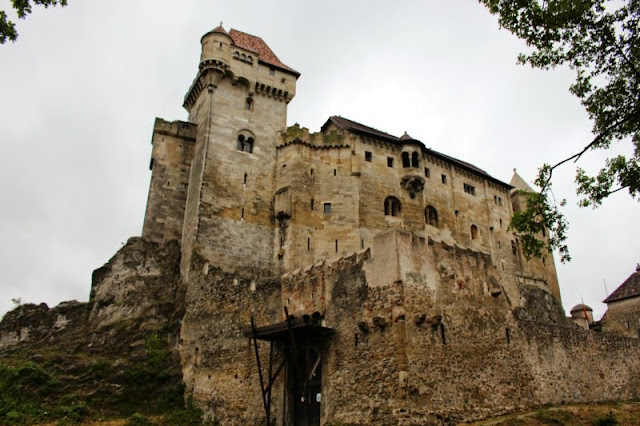 In fact, this might just be the world's only castle that gave its name - Liechtenstein literally meaning bright stone though it didn't look too bright in the damp weather - (via a few detours) to a country miles and kilometres away. 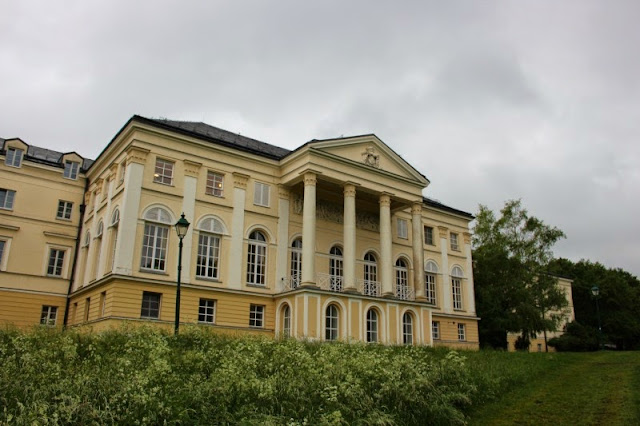