Special Exhibition: "Ready for the Island: The House of Brunswick-Lüneburg on the Path to London" 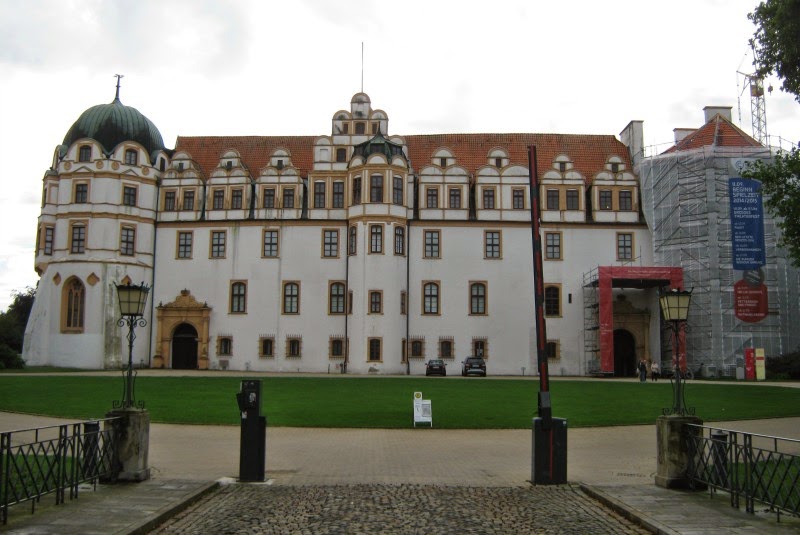 On my quest to see all of this year's special exhibitions about the Guelph family in Hanover, Brunswick, Celle, Wolfenbüttel and wherever there else is one in Lower Saxony, I'm one step further after recently visiting the "Ready for the Island: The House of Brunswick-Lüneburg on the Path to London" exhibition at Schloss Celle. The display is part of the "When the Royals Came From Hanover" exhibition series also including two entitled "The Hanoverians on Britain's Throne 1714-1837" at the Landesmuseum and the museum of Schloss Herrenhausen as well as one called "One Coach and Two Kingdoms: Hanover and Great Britain 1814-1837".

For many years, Celle used to be one of the most important residences of the Dukes of Brunswick-Luneburg as it was the seat of the subordinate Principality of Luneburg from 1378 until its end in 1705 when it merged with the Electorate of Brunswick-Luneburg. This year's special exhibition takes place in parts of the castle's museum, more specifically the guest rooms once inhabitated by King William III of England as well as the former ducal apartment.

The parts of the exhibition located in the guest rooms show the history of the Principality of Luneburg and what role the Luneburg branch of the Guelph family played in their Hanoverian cousins becoming British Kings in a short abstract. Personally, I found the rooms the exhibition was located in to be more fascinating than the exhibits - I simply love Baroque stucco. (Fun fact: You have to wear felt slippers to view this part of the exhibition, something I hadn't done in years but it's still as much fun as it was when I was a kid.)

The second part of the exhibition is located on the next upper floor in the ducal apartment of Duke Georg Wilhelm and portrays the situation on the British isles before the personal union; the family background of Electress Sophie and how the Guelph family came to the British throne in the first place; the rise of the Hanoverian Guelphs under the later Elector Ernst-August, Sophie's husband; the Guelphs and their soldiers; as well as Guelph family destinies during the time of the personal union such as Sophie Dorothea of Celle, reputiated wife of King George I. Highlights exhibit-wise include an Order of the Garter, marble busts of King William III and his wife Mary, and the "Act of Naturalization".


Good to know:
The residence museum is open Thursdays to Sundays between 10am and 5pm all year round. The special exhibition "Ready for the Island: The House of Brunswick-Lüneburg on the Path to London" runs until October 5. Admission is 5 euros per adult. For more information, have a look here.
Celle Germany Guelphs Lower Saxony Special Exhibition 2014 United Kingdom