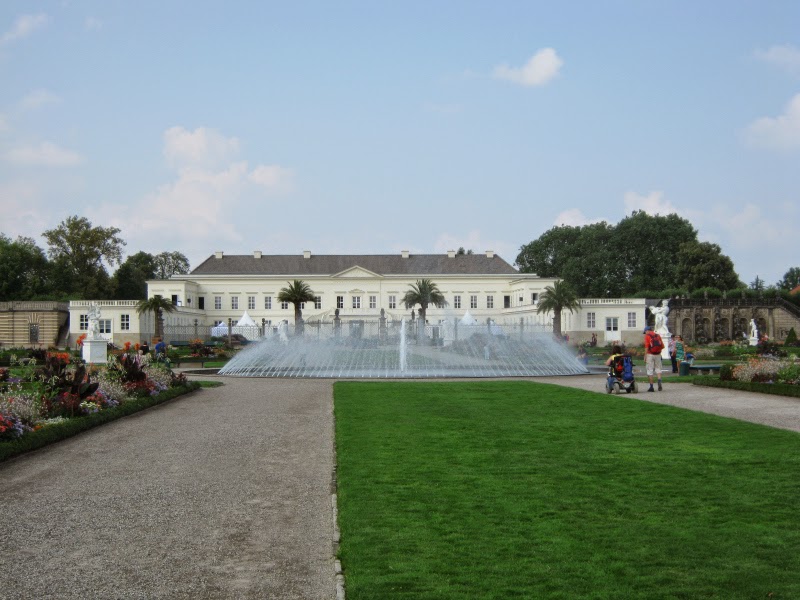 The origins of Schloss Herrenhausen, or Herrenhausen Palace, date back to the year 1638 when a farmyard called Höringehusen was built on the same site. During the following decades, many changes were made to the estate and slowly but steadily the manor house developped into a maison de plaisance. In 1676, Duke Johann-Friedrich of Braunschweig-Lüneburg commissioned architect Marinus Cadart to erect a summer residence for the Calenberg line of the Guelph family.

As one branch of the Guelph family could never have less than one of the other branches and the Wolfenbüttel line had just finished the Versailles-like Schloss Salzdahlum, Elector Ernst-August decided to expand his family's summer residence in Herrenhausen just outside of Hanover, however, the construction plans he had drafted himself were never carried out. His son, Elector Georg Ludwig better known as the British King George I, concentrated his efforts on creating a garden, a move that had been initiated by his mother, Electress Sophia. Between 1704 and 1706, the palace was overhauled though it's basic design features remained the same. 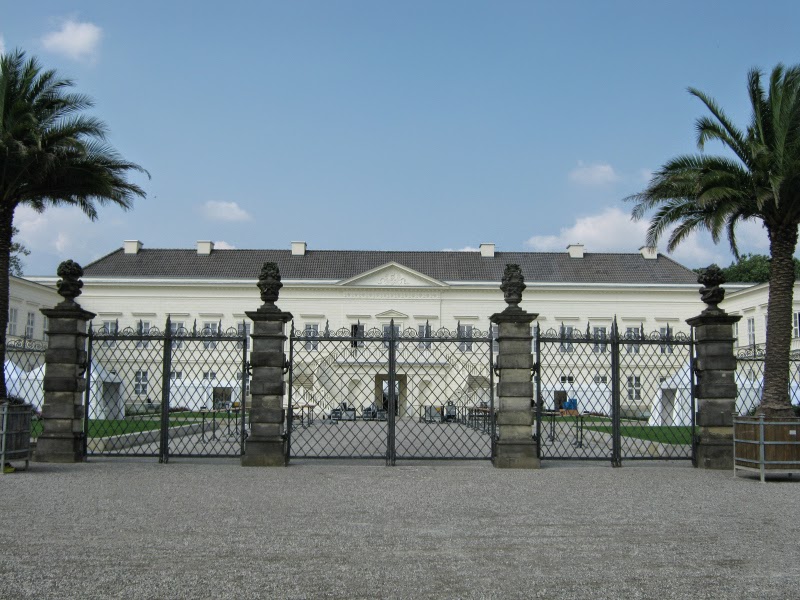 Actually a timber-framed building, Schloss Herrenhausen gave the impression of being a solid building due to extravagent plaster decorations. However, during the regency of King George III, who not once visited his Hanoverian palace but instead remained in Great Britain, the plaster was removed as he considered the expenses for the upkeep as too high.

Originally a baroque palace, the Schloss was reconstructed in a classical design by Georg Ludwig Friedrich Laves between 1819 and 1821. The palace directly adjoints the Great Garden, which had been designed by French gardener Martin Charbonnier on the request of Sophia, Electress of Hanover, and the Berggarten, Welfengarten and Georgengarten, alltogether known as Herrenhausen Gardens, are also very closeby. 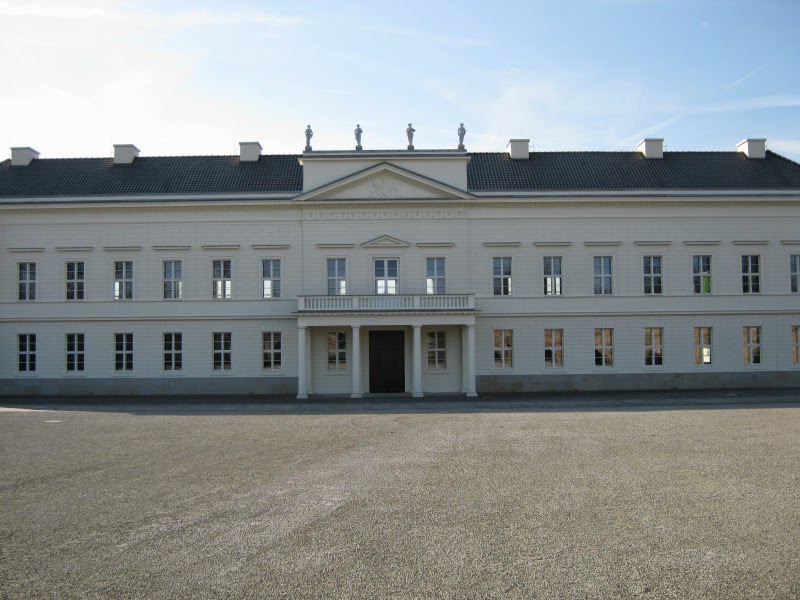 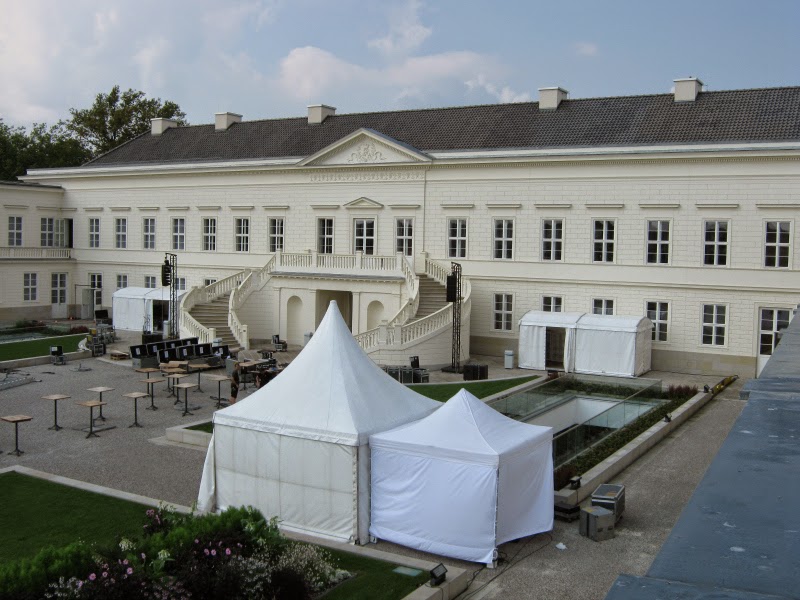 In October 1823, King George IV visited Hanover for three weeks and so Laves adopted the palace's interior for the use of a royal family at the time. After the personal union between the Hanoverian and British kingdoms had been dissolved, Schloss Herrenhausen again became a regularly used palace by the Guelph family. Located just three kilometres from the centre of Hanover yet outside of the town at the time it was built, Herrenhausen Palace served as a private summer residence for the ruling Guelph family while the Leineschloss, situated close to the centre of the city, was the King's principal residence.

When the Kingdom of Hanover was annexed by Prussia in 1866 and the Guelph rulers deposed and exiled, the Schloss remained their property. The palace and the gardens were opened to the general public after the annexation. In 1936, the family sold the Great Garden to the city of Hanover. A few years later, on July 26, 1943 to be exact, the Schloss was destroyed during bomb raids of the British Royal Air Force, even though the British Royal Family had apparently specifically requested that Herrenhausen should be spared from bombs. The palace burned down quickly as it was largely made of wood and painted plaster. Only the formal staircase as well as the orangery closeby survived the bombings. 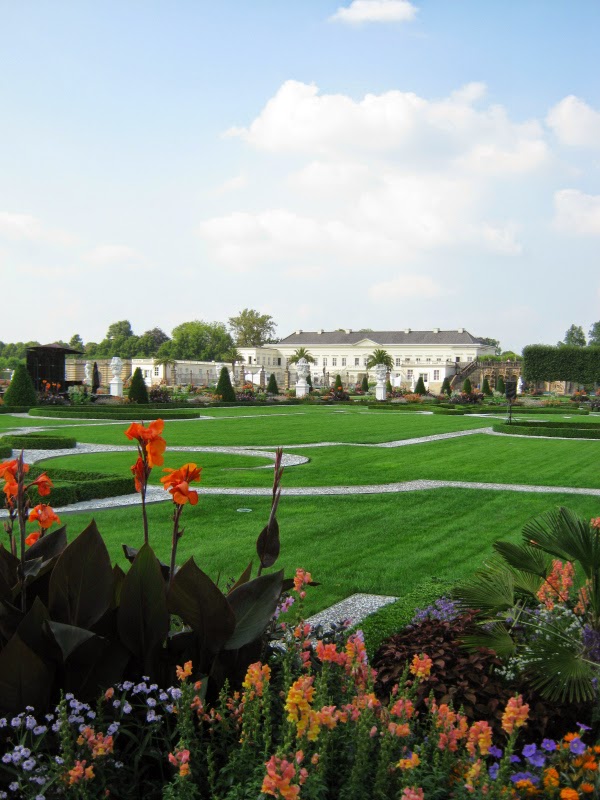 After the war, the Guelph family sold the remains of the destroyed palace to the city of Hanover. As early as in the 1950's, there were calls for a reconstruction of the Schloss but for many years no agreement could be reached. By 1966, the extensive gardens had been restored and about ten years later, even the then prime minister of Lower Saxony suggested to rebuild the palace though nothing ever came out of it.

In 2007 it became known that the city of Hanover and the VolkswagenStiftung had started talks about a reconstruction of Schloss Herrenhausen. Two years later a lease contract for the grounds were signed and in June 2011 the the first stone was laid. The costs of the reconstruction were estimated at around 20 million euros which were paid by the VolkswagenStiftung, who have chosen to create a modern interior design behind the newly erected old facades. The palace was rebuilt in neoclassical style on the basis of the historic plans by Georg Friedrich Ludwig Laves and while the main part now houses a scientific conference center, the side-wings are home to a museum with changing exhibitions. (More on the current one in a few days...)


Good to know:
Schloss Herrenhausen and the Herrenhäuser Gärten, which merit their own post and will thus be covered in an upcoming one, are accessible via a combination ticket available for eight euros per adult. The Großer Garten and Berggarten are open all year round. The museum is open every day during the summer season between 11am and 6pm. During the winter season (November 1-March 31), the museum is open Thursdays to Fridays between 11am and 4pm.
Germany Guelphs Hanover Lower Saxony Open Reconstructed