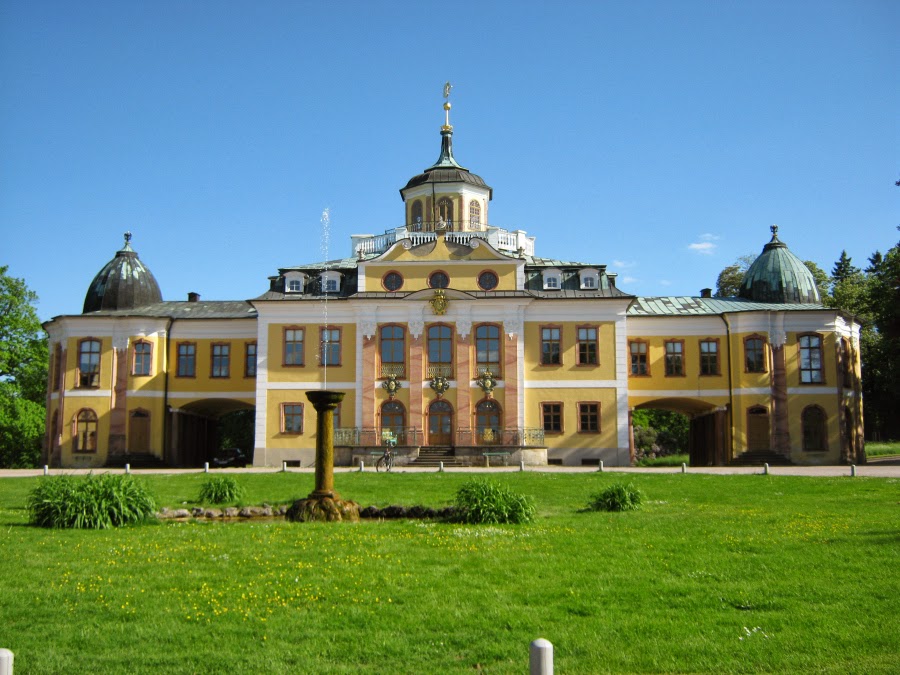 Schloss Belvedere is located on a hill in the southern outskirts of Weimar and is surrounded by 43 hectares of parkland. Built according to plans of Johann Adolph Richter and Gottfried Heinrich Krohne between 1724 and 1744 for Duke Ernst-August I of Saxe-Weimar-Eisenach, the palace is part of the UNESCO World Heritage Site "Classical Weimar". Got to admit upfront: Even though this palace is indeed visitable, I didn't do so which, however, did not have anything to do with a lack of interest but with a lack of time. After I spent a day touring Weimar - curiously enough a rather small but very important town in German history and cultural development - together with friends two years ago, we simply did not have the time and leisure to view yet another museum.

One of only a few building projects brought to fruition under Duke Ernst August I which remain preserved to this day, the palace was originally a hunting lodge. The original plans had been drawn up by Richter after the Duke had the idea to build something on the hill overlooking Weimar on a hunting trip in 1722. Inspired by visits to Versailles, another much more famous Belvedere in Vienna and Dresden after 1727, Duke Ernst August I decided to make changes and expand the existing hunting lodge. Wings and a dome were added to the palace by architect Krohne. The palace gradually became the focal point of the surrounding area featuring an axial system of paths, gardens, guards and cavaliers houses as well as farm buildings. The Duke's son, the future Duke Ernst-August II (1737-1758), spent parts of his childhood at Schloss Belvedere.

After Duke Ernst-August I's death in 1748, the parks surrounding the palace began to run wild and were only restored to their former glory when his daughter-in-law, who was widowed at the age of 18, made the Schloss her summer residence. Her son, Duke Karl August, pursued botanical studies at Belvedere together with no other than Johann Wolfgang von Goethe. Under Duchess Anna-Amalia's regency the Weimar court had turned into what was considered the most important cultural centre of all German states and so it's no surprise that Goethe and other artists and thinkers such as Wieland, Herder and Schiller also spent a lot of time at Schloss Belvedere.

In 1811, Duke Karl August left the palace and surrounding park to his son Hereditary Prince Karl Friedrich and his wife, the Russian Grand Duchess Maria Pavlovna. As the park had fallen into ruins, Karl Friedrich had them redone between 1815, the year Saxe-Weimar-Eisenach was elevated to the rank of a Grand Duchy, and 1830 to create both a Russian park for his wife to the west of the palace as well as a country park in post-classical, romantic style with meandering paths and numerous ornamental park constructions to the other sites. In 1828, Grand Duke Karl Friedrich also had a few changes, carried out by architect Clemens Wenzeslaus Coudray, done to the Schloss. Coudray created a new stairway in the main entrance hall, a new eastern entrance as well as various new interior designs. 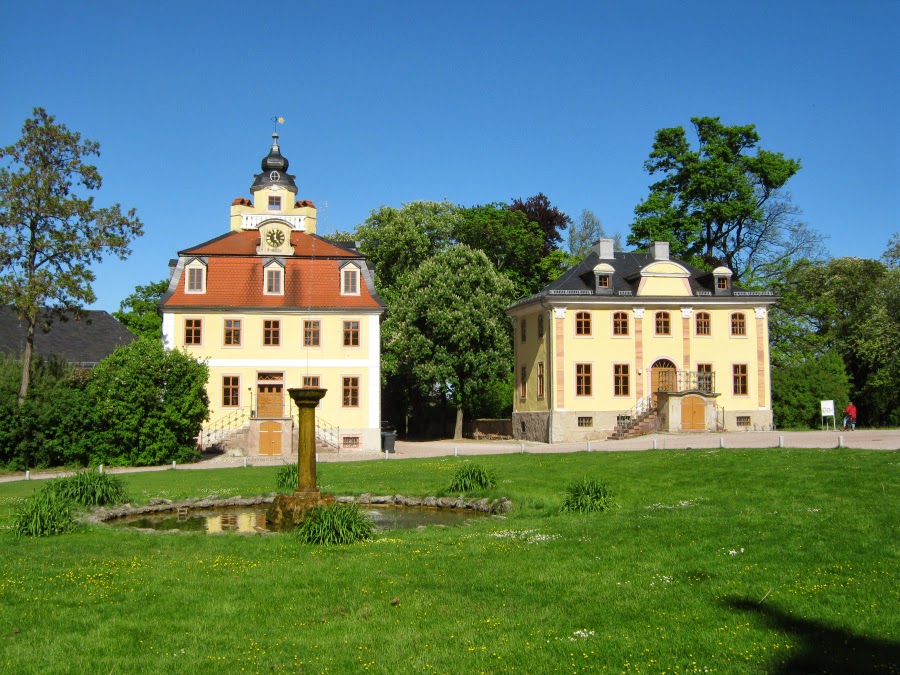 Grand Duke Karl Friedrich's son, Grand Duke Karl Alexander, had the palace, park and orangery carefully preserved and maintained. The last royal resident of Schloss Belvedere was his daughter-in-law, Duchess Pauline, who spent the summers of her final years as a widow until her death in 1904 at the palace. When the monarchy was abolished in 1918, the palace fell under the ownership of the state which firstly opened it to the public as a pre-classicist museum five years later.

In 1945, the Red Army opened their commandants's office at the Schloss and in the following years parts of park were turned into a cemetery. Between the end of the Second World War and 1975, about 2000 Soviet people were buried on the grounds. The park was, however, reconstructed between 1974 and 1978 and the Russian Garden between 1978 and 1982. German reunification in 1990 meant that many of the buildings were and are continuously undergoing renovations. In 1992, the palace's museum was reopened.

Today, the museum focuses on porcelain and glass from the ducal household. The collection includes court accessories along with French and German furniture from the 18th century. Another part of the museum focuses on architecture and garden culture in the times of Duke Ernst August I, and yet another part shows weapons formerly belonging to the ducal family. As I said before, I did not see any of the museum's or palace's interiors. The visit to Schloss Belvedere and its park and garden, however, was still very much worth it. You could probably stroll through the parks and enjoy the scenery for hours without even needing to take a look inside the palace or orangery.

Good to know:
The palace is open from March 30th to October 25th, Tuesdays to Sundays from 10am to 5pm. In addition, the orangery is open from January 1st to February 28th, Wednesdays to Sundays from 11am to 4pm as well as from March 1st to April 27th, Wednesdays to Sundays from 11am to 5pm. Public guided tours through the park are available on every Sunday between March 30th and October 25th at 11am. Admission to Schloss Belvedere costs 6 euros per adult and discount is €4,50. Youth under the age of 16 are free while students between the ages of 16 and 20 pay 1,50 euros. Entrance to the orangery costs extra. For more information, have a look here.
Germany Open Park Thuringia Weimar Wettin