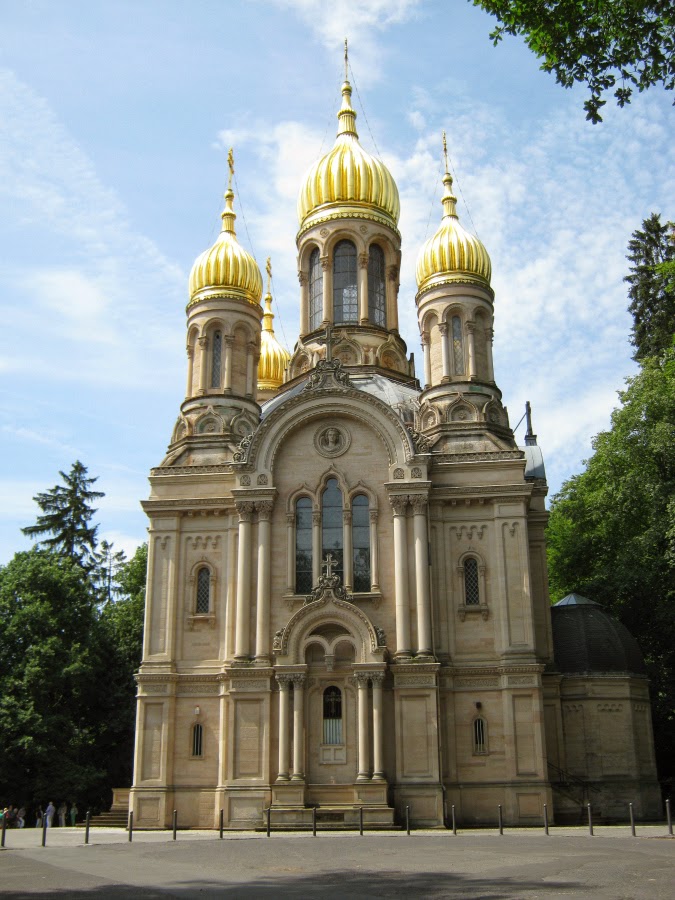 These days the last sovereign ruler of the Duchy of Nassau is most famous - Well, as famous as a historical ruler of Luxembourg can be - for also being the first Grand Duke of Luxembourg from the Weilburg branch of the House of Nassau. Before ascending to the grand ducal throne at the age of 73 after the House of Orange-Nassau had died out in male line, Grand Duke Adolph (1817-1905) had ruled the Duchy of Nassau until it was annexed by Prussia in 1866. Since 1816, the capital of said Duchy of Nassau had been Wiesbaden and so the capital of what is now the German state of Hesse is also the location of a church Duke Adolph built in memory of his first wife, née Grand Duchess Elisabeth Mikhailovna of Russia.

Only a year after their wedding in 1844, Duchess Elisabeth died shortly after giving birth to a stillborn daughter. After two years of mourning, Duke Adolph decided to build a church in memory his late wife and stillborn daughter. The Russian Orthodox Church of St Elizabeth, which was financed by Elisabeth's dowry, is located on Wiesbaden's Neroberg overlooking the city. This way, Duke Adolph was able to see the church from his main residence, the Stadtschloss. The church is also sometimes referred to as "Greek Chapel" for the simple reason that, at the the time it was built, every orthodox church in Germany was referred to as such.

Built according to the traditional Russian Orthodox building canon, the church is a so called cross-on-square church featuring five golden onion-shaped cupolas with golden Orthodox crosses on top. Each of the cupolas has windows in them to let daylight into the church. Prior to a visit by Russian president Vladimir Putin in 2007, the cupolas were cleansed and newly gilded for about half a million euros. The building has two entrances, one to the southern side only to be used by the Russian tsar and thus unused since 1917, and another one to the western side which is today's main entrance. On three sides of the church there are sculptures of Saint Helena, patron saint of Elisabeth's mother, Archangel Michael, patron saint of Elisabeth's father, and Saint Elizabeth, to whom the church is dedicated. 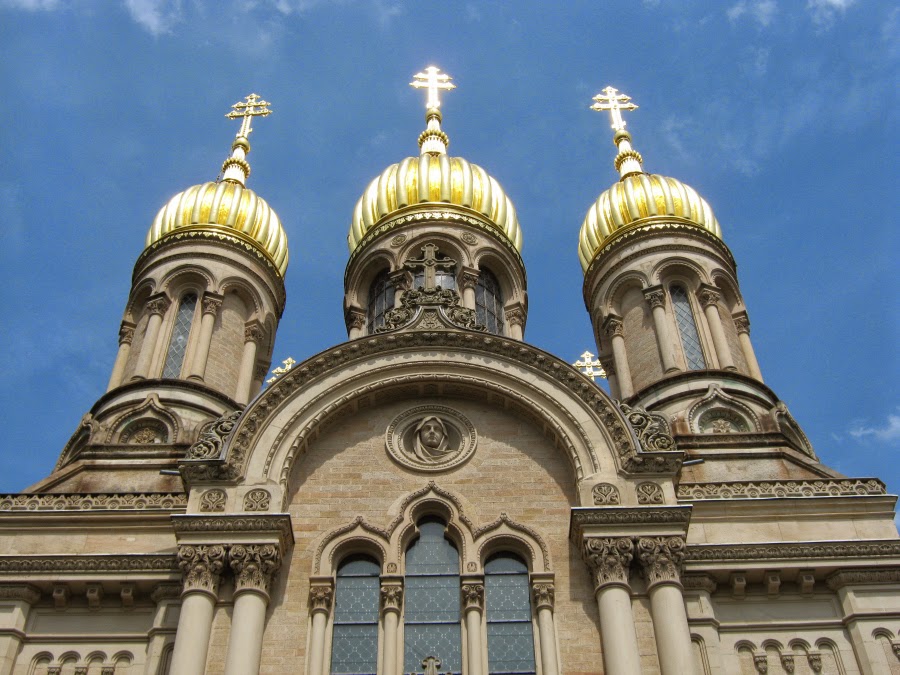 The church's interior features iconostasis by Carl Timoleon von Neff who combined the tradition of Tsar Peter the Great with Western influences. The church's most striking interior feature is the tomb of Duchess Elisabeth made of carrara marble and featuring a life-sized idealisation of the Romanov Grand Duchess. The church's religious opening took place on May 25, 1855, and the coffins of Elisabeth as well as her daughter were brought into the church under the following night. In 1903, Tsar Nicholas II and his wife Alexandra visited the church during their stay in Wiesbaden. (For more information about the church's history and architecture, have a look here.)

More recently, the church was visited by the Hereditary Grand Duke and the Hereditary Grand Duchess of Luxembourg last year. Also last year, yours truly visited the Russian Orthodox Church of St Elizabeth during a visit to Wiesbaden. The best way to get up the hill to the church is probably to use the Nerobergbahn, a funicular railway, and then walk the short distance from the station to the church. In a stroke of genius, I decided to walk, almost got lost as the area wasn't on my map but thankfully found it and saw lots of veeery nice houses - which I will most likely never be able to afford - on the way.

Nevertheless, my walk up the hill was very much worth it. Personally, I have a bit of a weakness for orthodox churches even though I have only visited two handfuls or so in my life thus far. This one in Wiesbaden might just be my favourite of them all. My penchant for all things Nassau(-Weilburg) is very well known but I also loved the lightness of the church which featured lots of marble and gold. I was also very impressed by the iconostasis and general decoration.

Good to know:
The Russian Orthodox Church of St Elizabeth is open all year round. From January to March and November to December, it can be visited between 10am and 4pm. In April, the church is open an hour longer until 5pm. May to October, the church can be visited between 10am and 6pm apart from Saturdays, when it is only open until 4:45pm, and Sundays, when it opens at 12:30 pm, due to worship services. I don't quite remember how much admission was exactly, either one or two euros. For more information, have a look here or here if you know Russian.
Church Germany Hesse (state) Nassau Romanov Wiesbaden