Cenotaph of Emperor Maximilian in Innsbruck 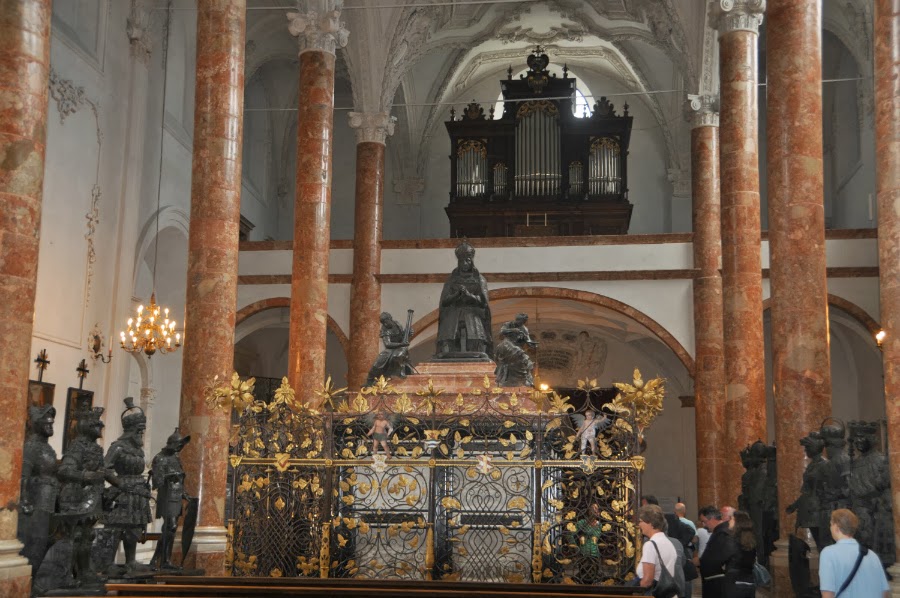 Facing the Kaiserliche Hofburg in Innsbruck - no, not only Vienna has one - stands a church known as the Hofkirche which Holy Roman Emperor Ferdinand I (1503–1564) erected in memory of his grandfather, Emperor Maximilian I (1459–1519). Designed by architect Andrea Crivelli of Trento in the traditional German form of a hall church, it consists of three naves with a setback three-sided choir, round and pointed arch windows as well as a steep broken hip roof. Built in a mixture of late Gothic and Renaissance styles, the Hofkirche was finished in 1553 after four years of construction time. The most prominent feature of the church is the cenotaph of Emperor Maximilian.

Already during his lifetime, the Habsburg ruler had taken a liking to monuments built in his honour and so the idea to construct a memorial for himself and the Habsburg rule of the Holy Roman Empire wasn't a far-fetched one for Emperor Maximilian. The construction of the ornate black marble tomb took 80 years to be finished and out came what is considered one of the finest examples of German Renaissance sculpture. The memorial as well as a number of other features such as the silver chapel make the Hofkirche one of Innsbruck's most interesting churches to visit. Personally, I found it more interesting than the Tyrolean capital's cathedral for example.


The cenotaph, which is made out of black marble, was built according to Mannerism-style plans of the Prague-based Abel brothers. The tomb was commissioned by Emperor Maximilian himself and took more than 80 years to be finished. While the sarcophagus itself was completed in 1572, the final embellishments such as the kneeling emperor on top, the four virtues and the iron grille surrounding the tomb were added within the next twelve years. The tomb is adorned with 24 white marble reliefs depicting events of Maximilian's life such as his two weddings and numerous battle victories. The most prominent features of the already impressive memorial are, however, 28 larger than life-sized statues surrounding the tomb. 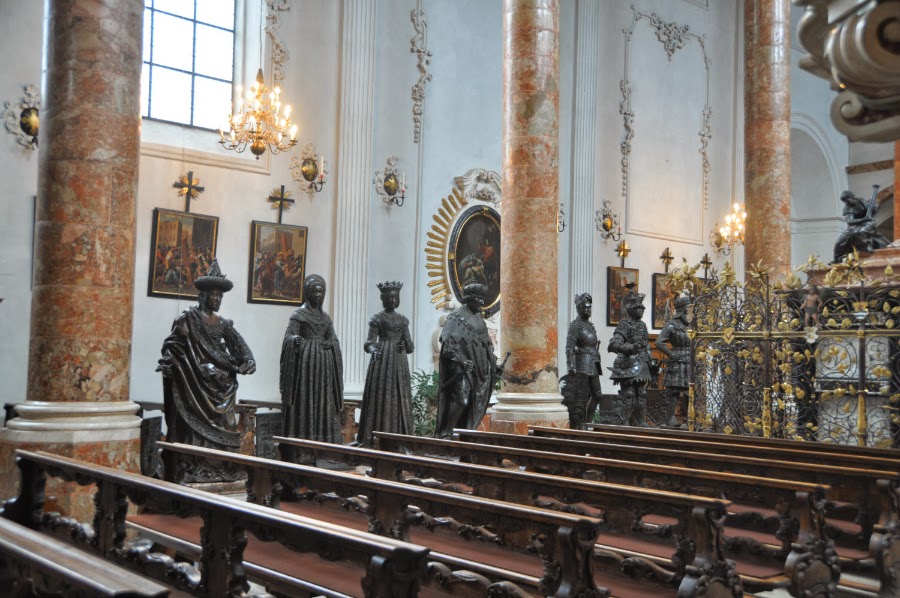 Emperor Maximilian had actually been a tad more ambitious and commissioned 40 statues, 100 statuettes and 32 Roman emperor busts during his lifetime but only 28 statues of relatives, ancestors and heroic figures were finished. These “black men” (Schwarzmander) flank the grave-site and give the church its by-name Schwarzmanderkirche (black men church). The expression, however, is a bit misleading as the bronze statues also comprise women. Among the statues are Emperor Maximilian's two wives Maria of Burgund and Bianca Maria Sforza, representatives of Christianity such as the crusader Gottfried of Bouillon as well as members of other European dynasties as to put the emperor’s claims forward. The gallery also contains some 23 statuettes of Habsburg saints and the church also used to contain a number of busts of Roman emperors though they have been removed within the last few centuries and can now be found at nearby Schloss Ambras and in Munich.

During his lifetime, Emperor Maximilian did not have one main residence but instead often changed residences throughout the year. Only on his deathbed he decided that he wanted to be buried in the Wiener Neustadt. It, however, turned out that the castle chapel there, which is located above a gateway, could neither hold the heavy tomb nor the more than two-metre-high statues. Emperor Ferdinand I was the one who built the Hofkirche in Innsbruck, one of the favourite places of his late grandfather, to house the tomb and statues. As Emperor Maximilian remains stayed in Vienna upon his request, the memorial is a cenotaph. Nevertheless the Hofkirche is the final resting place of another member of the Habsburg dynasty, Archduke Ferdinand II of Further Austria.

Good to know:
The Hofkirche isn't entered by the main church door but through an entrance a little to the side that is also the entrance of the Tiroler Volkskunstmuseum. The church is open daily from Monday to Saturday between 9am and 5pm. On Sundays and public holidays you can visit between 12.30pm and 5pm. Admission is five euros, combi-tickets with the neighbouring museum are available. For more information, have a look here.
Austria Church Habsburg Memorial Open Tyrol