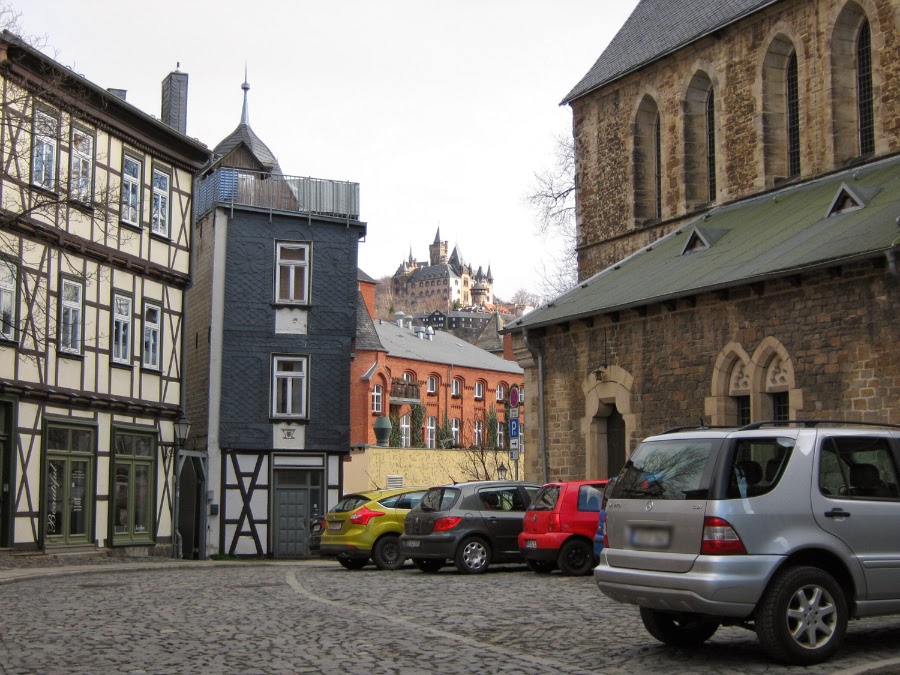 Schloss Wernigerode is located on a hill above the small town by the same name which lies about 70 km south of Brunswick in the German state of Saxony-Anhalt. While the present day castle was finished in the second half of the 19th century, the building was firstly mentioned as a castrum in 1213 and had a changing history since.

The first Count of Wernigerode, Adalbert of Heimar, was firstly (and for the only time) mentioned as such as a witness in a document by Bishop Reynard of Halberstadt on October 18, 1121. Originally intended to secure the way of the German emperors of the middle ages to their hunting grounds in the nearby Harz mountains, the original castle (or Burg in German) was likely built in the first quarter of the 12th century and owned by Count Adalbert and his descendants. His family died out in male line in 1429 and so the building was inherited by the related Counts of Stolberg though it was soon temporarily pledged to Count Heinrich of Schwarzburg. Only in the 16th century, the Stolberg family took up residence in the castle.

Already towards the end of the 15th century, the building had been remodelled in Gothic style and during the course of the 16th century, the castle became a Renaissance fortress. Vestiges of both can still be found in today's Schloss. In 1645, the House of Stolberg was divided into the senior Stolberg-Wernigerode and the junior Stolberg-Stolberg lines, the castle was inherited by the former and subsequently became their main residence and capital of the County of Stolberg-Wernigerode. They had to give up residence after quarrels with the town officials of Wernigerode towards the end of the Thirty Years' War which badly damaged the castle that was considered invulnerable before.

In 1710, the young Count Christian Ernst of Stolberg-Wernigerode (1691-1771) made the Schloss his main residence again and had it rebuilt as a Baroque-style round castle. The castle received its present-day appearance during the late 19th century when Count Otto of Stolberg-Wernigerode, who you might know as Bismarck's vice-chancellor, had it remodelled by architect Carl Frühling. The renovations started a year prior to Count Otto's marriage to Princess Anna Reuß zu Köstritz in 1862 and was finished in 1885. Through the 19th century renovations, Schloss Wernigerode became one of the prime examples of the Northern German historicism. Some rooms did get another make-over during the early 20th century. 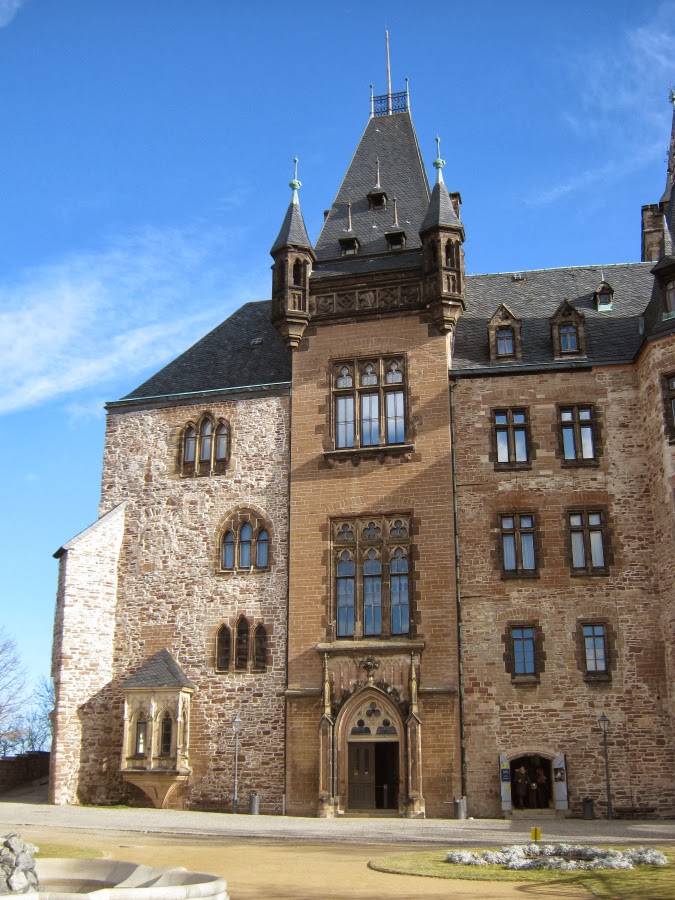 The castle served as the main seat of the Wernigerode branch of the House of Stolberg until 1929 when they had to give it up following the Great Depression that hit the family hard. In the following years, parts of the interior and the gardens of the Schloss could be visited by tourists in order to make some money to pay off debts. Already back then, the castle drew about 40,000 visitors each year. In December 1943, the castle was closed and starting in 1944, the Rüstungskontor GmbH, a defence contractor, started to use it residentially. The last Fürst of Stolberg-Wernigerode to own the Schloss was Prince Botho who was expropriated by the Soviet Military Administration in Germany in 1945 when the family flew to West-Germany. In 1946, the Soviet army destroyed all historical weapons and paintings featuring people in uniforms.

In the period that followed, a Feudalmuseum (feudal museum) was established in the castle by the government of the German Democratic Republic to show their people just how bad the aristocracy had once treated their subjects. To achieve that, a new torture chamber was built in the castle vaults. Of course the time until the German reunification did not help the rest of the Schloss either as many rooms were simply painted over without regard to the elaborate wall decorations.

Since at least the reunification in 1990, the Schloss is owned by the town of Wernigerode and they have done a lot to preserve the building and unearth its former splendour. I was told that the members of the Stolberg-Wernigerode family once again regularly visit the city and their castle. The current Fürst lives in Hesse but the majority of furniture exhibited in the castle is borrowed from him as the family was able to take a lot with them when they fled the Soviet occupation zone in 1945. 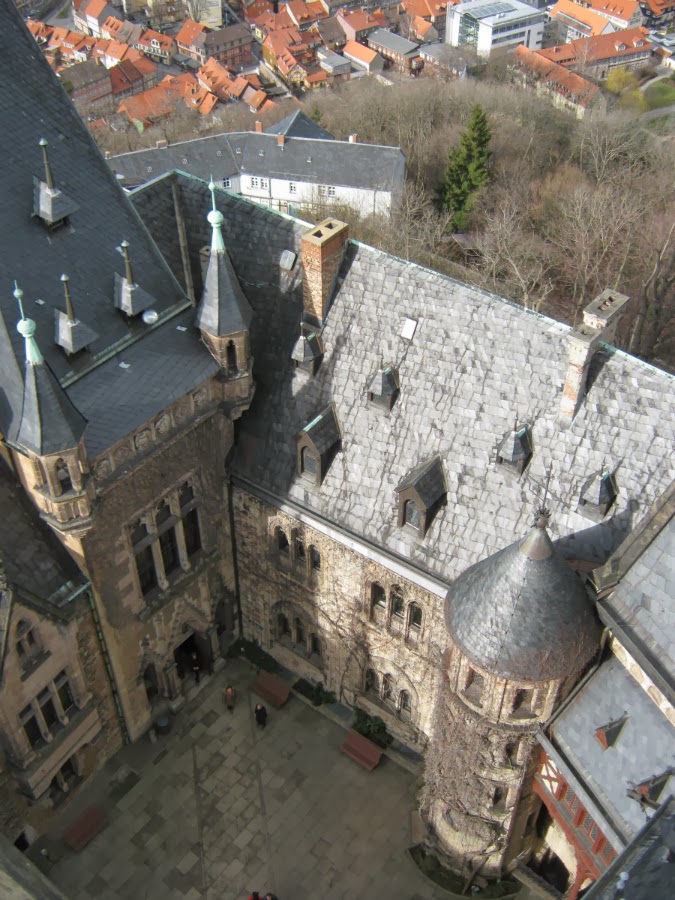 The castle is situated on a hill above the town of Wernigerode which generally is quite famous for its great number of Gothic timber facade houses that are also worth visiting. As parking space is sparse up on the castle hill, you either need to walk up there like I did or take a bus or a horse-drawn carriage. The castle grounds also include a number of servants buildings which today are mainly used as shops and holiday rentals. The gardens and immediate surroundings of Schloss Wernigerode are accessible to anyone but to view to actual castle, you will need to pay admission. (See below for details.)

Relatively uncommon in Germany where you can usually only visit castles in guided tours, there were two separate tours of the castle you could do by yourself. If you come in a larger group, you can also book a guided tour or rent an audio guide. We bought a little brochure of the Schloss in addition to the written information that was available in most of the fifty or so rooms that we saw - according to the brochure, I honestly did not count - and which, in my opinion, was sufficient. I also asked a few questions to one of the watchmen and he was very knowledgeable and able to answer all of them.

While the first tour leads the visitors through the day-to-day rooms of the former Counts and later Princes of Stolberg-Wernigerode, the second tour features the castle's church, the more elaborate state apartments as well as some private rooms. All the rooms feature numerous paintings and furniture, most of which are rented for 20 years from the Prince of Stolberg-Wernigerode by the town. In addition, a number of silverware and porcelain as well as uniforms, weapons and such are exhibited. Most of the accessible rooms are back in the shape they were prior to the end of the Second World War though towards the end of the second tour, you can also see a room that was painted over during the time of the East-German state and in yet another room, they have started to uncover the old wall decorations beneath the paint.

In addition to the two self-guided tours, we did a guided tour of the castle church's attic, the tower as well as the vaults. The attic was especially interesting for the children as it, as well as other parts of the Schloss, were featured in a recent screen adaptation of a famous children's book, Otfried Preußler's "The Little Ghost".
The children were also allowed to ring the church bell while we were in the attic. Probably more interesting to the adults of the group, we then visited the the castle's highest tower from which you can view the surroundings. When the weather is good, you can view as far as 50 kilometres and see, among other things, Halberstadt as well as the the highest peak of the Harz mountain range, the Brocken. Unfortunately for us, the weather wasn't ideal yesterday and the Brocken was covered in clouds though we could see quite far in the other direction. Afterwards, the tour also paid a short visit to the other end of the castle, the vaults. 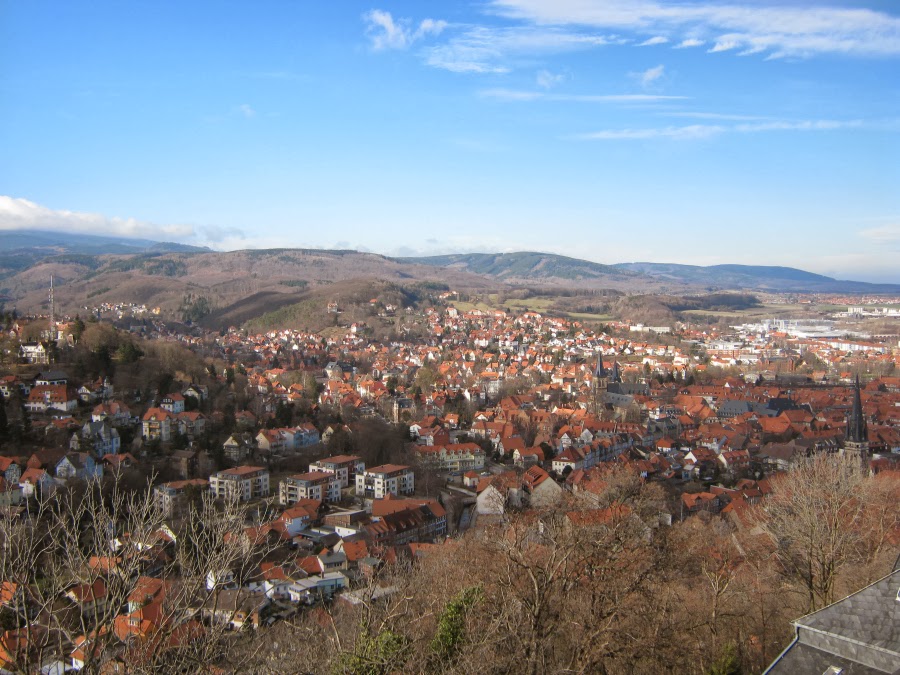 Good to know:
Between May and October, Schloss Wernigerode is open daily between 10am and 6pm. During the winter season (November to April), it is closed on Mondays but can be visited from Tuesday to Friday between 10am and 5pm. On Saturday, Sundays and holidays, the castle is open between 10am and 6pm. Adults pay 6 euros admission, children between the ages of 6 and 14 pay €2,50 and children under six do not need to pay anything. There's a reduction for students of one euro, family tickets are also available. For a variety of guided group tours, you will need to pay a little surcharge. Audio guides can be rented in German, English and Dutch. For more information, have a look here.
Germany Harz Open Saxony-Anhalt Stolberg