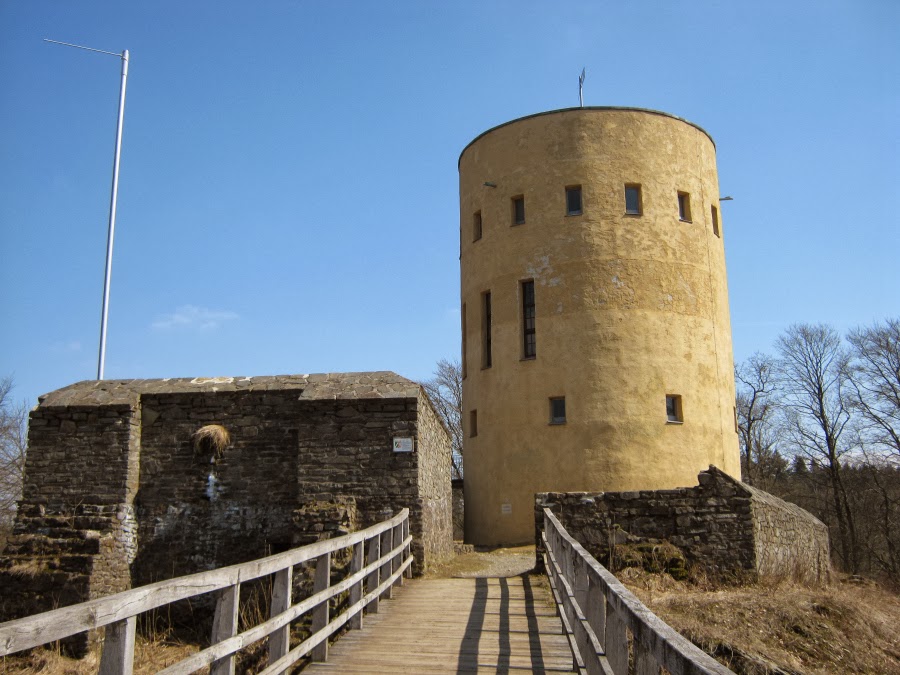 Today's castle I visited last spring and probably is not very familiar to you though it does have some very royal connections. The ruined castle complex Ginsburg lies high above the constituent community of Grund of the town of Hilchenbach in the Siegen-Wittgenstein district of the German state of North Rhine-Westphalia. To be honest, it probably isn't a place that you would go to for itself but friends and I included it in a longish Sunday hike and it was a nice place to take in some of the scenery around.

The Ginsburg is believed to have been built between the years 1220 and 1240 by Count Heinrich II of Nassau, the most common ancestor in Nassau-line of the heads of the two branches of the House of Nassau, King Willem-Alexander of the Netherlands and Grand Duke Henri of Luxembourg. The Counts of Nassau used the building as a border fortress against the Counts of Wittgenstein and the Sauerland properties of the Electorate of Cologne. The Ginsburg was firstly mentioned in 1255 when Count Heinrich's two sons, Otto and Walram, divided his properties among them. In 1292, Count Walram's son Adolph pledged the castle as well as some other properties to the Archbishop of Cologne in order to secure his vote in the election of the Rex Romanum. When the Walram line of the House of Nassau was divided yet again in 1303, Count Heinrich III of Nassau-Siegen received the Ginsburg. In 1345, the castle was sold and in the document about the sale, the Ginsburg is described as to have featured a number of towers, houses, gates, wells, fortifications, drawbridges and a moat.

In 1360, the Nassau family bought the Ginsburg back and it remained in their hands until 1806. During the late 14th and 15th century, many changes were made to the castle that had its most famous outing when in in April 1568 it became the place where Willem I of Orange-Nassau first devised the plans which would eventually lead to freedom for the Netherlands. It was also the Ginsburg Heath that was the meeting point of the third army group under Count Ludwig of Nassau before they made their way to the Netherlands. 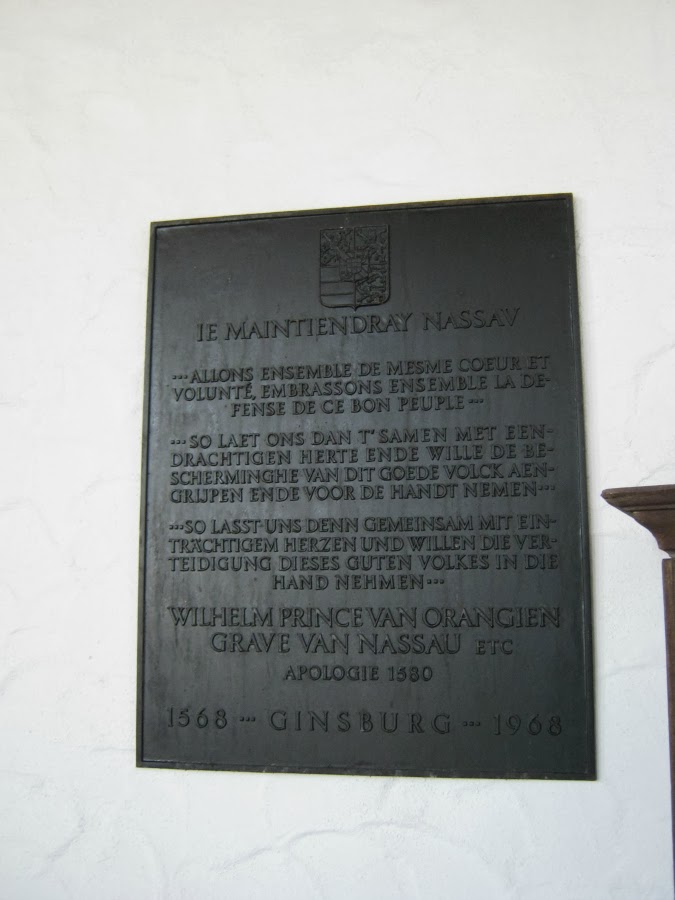 In the following centuries, the castle sank into insignificance. During the late 16th century, changes were made to the Ginsburg as an attack by the Spanish troops was feared. In 1623, when Count Johann VII of Nassau-Siegen died, the castle was inherited by Count Wilhelm of Nassau-Hilchenbach who planned to take up residence there but changed his mind when plans for changes became too expensive. The last renovations were done in 1683 by Count (and later Prince) Wilhelm Moritz of Nassau-Siegen but stopped due to quarrels within the family. By the middle of the 18th century, the Ginsburg had fallen into ruins.

In the 19th century, the castle was mostly buried by soil though its outlines were still visible. Extensive excavations of the ruin started in 1961 and the castle's keep was rebuilt. These days, you can tour the ruins and also have a look at the insides of the keep that is also used as a registry office today. The viewing platform on top offers a great overview over the region.


Good to know:
You can visit the ruined castle for free though the local society for the preservation of the ruin asks for a small donation to be thrown into a box at the entrance of the castle. If you wish, you can also rent the insides of the tower or get married there.
Germany Nassau North Rhine-Westphalia Ruin Siegen-Wittgenstein