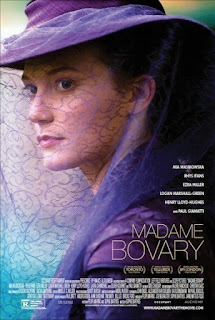 Pride comes before the fall - with this simple proverb the story of "Madame Bovary" is easily described, yet there is so much more behind it. A very condensed version of Gustave Flaubert's novel can be found in the 2014 movie adaptation starring  Mia Wasikowska, Henry Lloyd-Hughes, Paul Giamatti and Ezra Miller. While by no means a film could tell the story of Flaubert's novel in its entirety, this adaptation only scratches of the surface of things and thus falls in line with the others I have seen.

The 2014 adaptation of "Madame Bovary" starts with its ending and then works its way to the tragic demise of Emma Bovary. However, while Wasikowska does a great job at making Emma as unlikable as possible, her character's choices seem childish and impulsive rather than a backlash against the stifling boredom within a loveless marriage.

Instead of falling in line with the simple country life, Emma, coming from rather modest circumstances, educated by nuns and thus a supposedly virtuous bourgeoise, has all kinds of unfulfilled demands. The daughter of a pig farmer longs for fine conversation, splendid festivals and great feelings. As her doctor husband can't fulfill any of those, she seeks prestige and excitement outside the bonds of marriage. It's the still very valid tale of the bourgeoisie that more is always better - and that the mentality of "Buy now, pay later" could bring about your downfall as much in 19th century France as it can today. While lovely to look at, this film adaptation features little tension as Emma's romantic and financial troubles collide as the much-needed character development sadly sorely lacks.