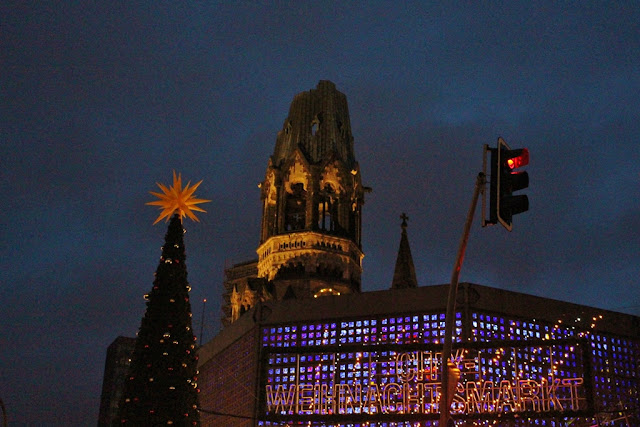 The Kaiser Wilhelm Memorial Church, or Gedächtniskirche in German, is one of Berlin's most iconic sights: Destroyed during the Second World War, it was left as a half-ruin after 1945 and not rebuilt, but rather its hollow spire, nicknamed the "hollow tooth" (hohler Zahn), remained as a reminder and warning of war. Four buildings were later added to the shattered remains - including a new tower and Protestant church, called the "lipstick and powder compact" (Lippenstift und Puderdose) by locals. (Yes, the people of Berlin do love themselves a good nickname: The TV Tower is "the Pope's revenge", the Palace of the Republic "Erich’s Lampenladen" (Erich’s bulb shop) or, more cynically, the Palace of Tears for the terminal building of the former border crossing of Friedrichstrasse.) 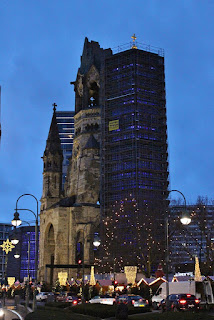 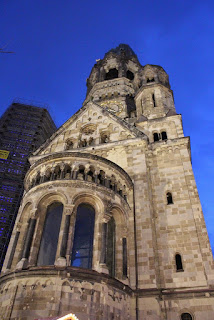 The foundation stone of the Neo-Romanesque Kaiser-Wilhelm-Gedächtniskirche was laid on March 22, 1891, as part of a Protestant church-building programme initiated by Emperor Wilhelm II and his wife Empress Augusta Viktoria to counter the German labour and socialist movements by a return to traditional religious values. Wilhelm II, a maternal grandson of Queen Victoria of Great Britain, decided to name the church in honour of his paternal grandfather Wilhelm I, who was the first Emperor of the unified Germany. 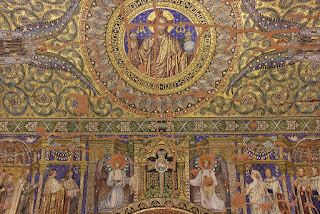 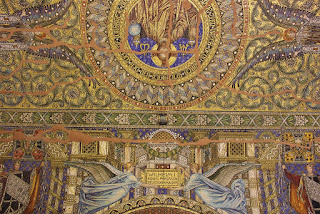 While the church was officially built by the Evangelischer Kirchenbauverein, Wilhelm II and Auguste Viktoria took a great interest in the construction and visited numerous times during the process. The church was built according to plans of Franz Schwechten who took inspiration from the Minster of Bonn. The Kaiser Wilhelm Memorial Church was dedicated on September 1, 1895, the eve of Day of Sedan celebrating the German victory over the French in 1870 that would ultimately lead to the unification of Germany. At the time of the dedication, the entrance hall in the lower section had not yet been completed. It was only opened and consecrated on February 22, 1906. All in all, construction costs amounted to 6.8 million gold mark, raised primarily through donations. 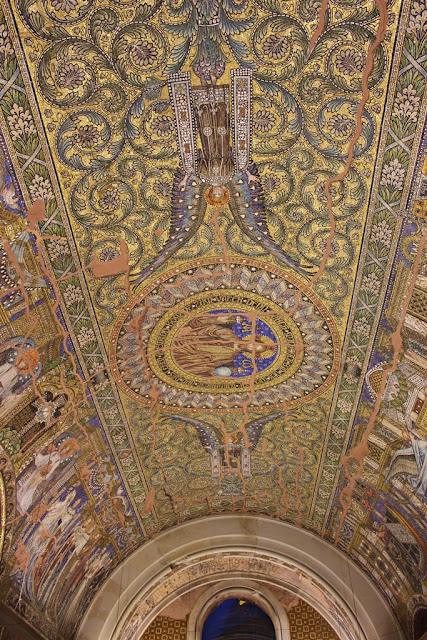 In World War II, on the night of November 23, 1943, the Kaiser-Wilhelm-Gedächtniskirche was extensively damaged in an air raid. While it wasn't damaged beyond repair, it was still decided that instead of rebuilding the old church, it was decided to build a new one next to it. While the original plans actually included to tear the half-ruined spire down, the plans were revised after a public outcry during which the tower was characterised as the "heart of Berlin". It has since become an anti-war memorial to peace and reconciliation. 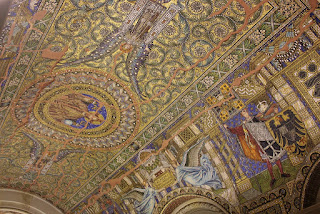 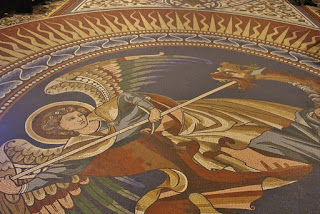 While the church's exterior is quite famous and one of the best know sights of Berlin, its interior is far less known in comparison. Its floor contains a mosaic of the Archangel Michael fighting the dragon. The ceiling shows a procession of Hohenzollern princes of different eras. Other mosaics show important monarchs in medieval Germany, Reformation thinkers and Reformation princes as well as biblical scenes. The entrance hall beneath the damaged spire also contains a damaged statue of Christ which originally stood on the altar of the old church as well as the Cross of Nails. The cross is made from nails of the roof timbers of Coventry Cathedral, which was severely damaged in a German air raid on November 14, 1940.


Good to know:
The Kaiser-Wilhelm-Gedächtnis-Kirche is open to visitors from Monday to Sunday from 9am to 7pm. Church services in the newer part of the building are on Sunday at 10am and 6pm. Admission is free.
Berlin Church Germany Hohenzollern Prussia