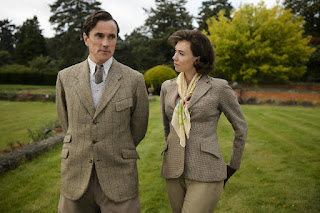 With the coronation over, we are half-way through the first season of "The Crown" and episode six reminds the viewer a bit of a soap opera, to tell the truth. While Elizabeth is now officially "the most famous woman in the world" thanks to Philip's idea to televise the big event, her sister Princess Margaret is still head over heels in love with divorcee Peter Townsend. She makes a telephone call - how complicated it once was! - to her sister to invite her over to dinner - "oh" - with Peter - "oh" - because they got something to tell her - "oh". Oh, how much the word "oh" can mean...!

"As your sister I am never going oppose it", says Elizabeth when Margaret and Peter tell her that they want to get married. Well, but it's not going to be as easy as the monarch. Philip's isn't thrilled about his sister-in-law's choice saying "I'm confident I've met more interesting plants in my life." Neither the Queen Mother nor the courtiers are in favour of Margaret and Peter getting married with the permission of the Queen. Good thing is that Margaret won't need her sister's approval in two years time thanks to the Royal Marriage Act of 1772. Oh, and the public knows about the royal affair thanks to Margaret picking fluff from Peter's uniform at the coronation and a newspaper making it a front page headline.

So the new plan is for Margaret to wait until she's 25 years old. In the meantime, Peter will be posted to Brussels to grow a bit of grass over the whole thing because the Queen Mother is confident, "this could destroy the monarchy". I don't blame her, about the only things divorce had brought the British monarchy before that were abdications and beheadings. Margaret is certain that she can push her will through. "No one wanted Philip, but she dug her heels in and got him", she says about her sister's choice of husband. I hate to break it to you, love, but a prince of the blood with a few questionable relations isn't the same as a divorced commoner - at least not in the world of Windsors. The British public at least is in favour of the happy couple. Elizabeth tries to be supportive of the whole situation by inviting Peter to accompany her on a visit to Northern Ireland, but the whole plan backfires as it turns out that Peter is now the star of the show.

The fallout is swift and cruel. Peter is send to Brussels early and only got two hours to even pack. "Tick, tick, tick", the private secretary tells him and I'm afraid not only the time is ticking for the plane to leave. "You reap what you sow", Margaret tells Elizabeth. It's going to get interesting in this royal soap opera.
CastleDrama