Spoilers ahead, you have been warned. 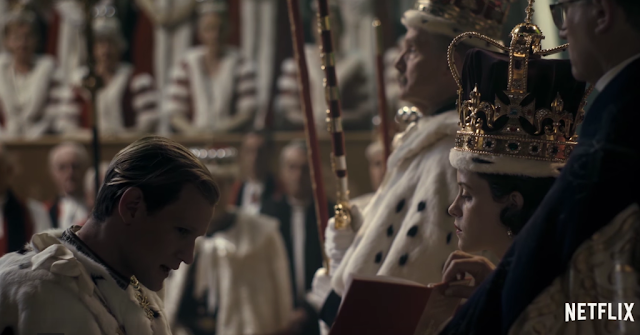 Coronation today is about to be finally here. It's been brewing all season. And so the fifth episode of "The Crown" pulls together a lot of the topics it touched on in the previous four installments: Philip's problems with his role as second fiddle consort, Elizabeth trying to remain Lilibet while also being Queen, tradition versus modernity and the still very valid question of what the monarchy even is in the mid-20th century.

The fifth episode of the Netflix original though kicks off with a memory of Elizabeth's childhood. Her father asks her to help him practise for his own coronation and she sees how he tries on the crown for the first time. 17 years on, Elizabeth does the same in front of her own children. She then asks whether there is a chance of her borrowing it to practise, "Borrow it, ma'am? From whom? If it's not yours, whose is it?" While trying on the crown, Elizabeth also has an idea that may deter her husband from gaining his pilot's license faster than anyone in the Kingdom ever cause, really, what else does he have to do at this point while his wife is out and about "Queening" as he puts it? Well, become the chairman of the coronation committee for starters. The Duke of Edinburgh certainly has a few ideas how to make the coronation more public-friendly but, expectedly, not everyone is in favour of that.

But first, let's head to Paris where the Duke and Duchess of Windsor try to make ends meet by inviting some magazine to their house and give a few lessons on entertaining including some laugh out loud funny moments. It all gets very serious when the Duke tells the world's worst prepped journalist that he never wore the crown because "I never had a coronation". He then heads to London to see his dying mother and pen another nasty letter to his wife how horrible his relations are. If you thought though that your mother describing your brother as "the perfect son" is as bad as it gets, listen to the Queen's private secretary who compares the Duke choosing love over the crown to the Battle of the Somme. Burn. Also: Nobody wants David at the coronation and most certainly not his wife.

Queen Mary eventually dies and much what we see of her funeral is Philip going on and on about needing to modernise the monarchy. You got a point, dude, but your wife's grandmother's funeral isn't the place to discuss it. The place to do so is a meeting with a "herd" "pack" "school" bunch of "stuffy old Etonians" and Philip clearly likes to show them who is the boss in this room. Much has been talked about the portrayal of Prince Philip as the outsider in "The Crown". I have my reservations about some of it but here he definetely is. For them, he will forever remain a foreigner. A foreigner with a mother and grandmother born at Windsor Castle that is.

Before we get to the actual coronation, Winston Churchill sits down in an audience with Her Majesty for the first time telling her that she needs to make a few decisions about the event. He tells her that nobody is a fan of what Philip is proposing, including for the coronation to be televised, but that they will do as she pleases. He also gives a speech about modernity and tradition as well as the purpose of a monarchy with some questions still very relevant more than 60 years on.

Then the Queen and her husband have a fight in the place least likely for them to actually have a fight at, Westminister Abbey. It's about the monarchy in modern times and the always lingering topic of Philip's role in all of it. "Are you my wife or my queen?" he asks, outraged at the prospect of him kneeling before her, something she asks of him while agreeing on televising the event. Frankly, it's a bit of a stupid question because "I'm both!", says the Queen. "I want to be married to my wife," he whines. "I am both and a strong man would be able to kneel to both," she fires back. Any more questions? Of course he will kneel during the ceremony and it shows that something has profoundly shifted in their relationship.

The actual coronation, we get to see through the eyes of the Duke of Windsor,  who hosts a few friends for a viewing party at his home in Paris, and the BBC commentary. Probably a very wise idea because no budget in the world would be able to show the grandness of this occasion. The coronation of Queen Elizabeth II was one of the first major live events in television history, something unheard of in the years prior and also showing the outsider's perspective gives the story something extra. Though we get to see something the TV cameras back in the day weren't allowed to: The anointing. Claire Foy is great here again. Extremely serene on the surface with emotions boiling behind her hardly telling face. We get to see exactly the moments of the coronation service that Philip had to promise the coronation committee the public wouldn't because, as the Duke of Windsor, puts it, "Who wants transparency when you can have magic?" Amen.
CastleDrama