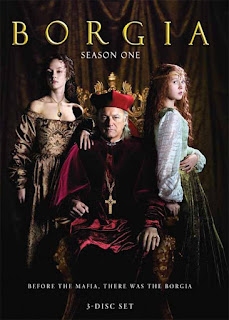 There was a bit of a Borgia boom back in 2011 with not one but two TV series about the influential Spanish-Italian noble family of the Renaissance era. Many have probably heard of Showtime's "The Borgias". Fewer people have likely come across "Borgia" (also called "Borgia: Faith and Fear") a French-German-Czech production featuring an international cast also available in English.

I have never been the type of person who looks for historical accuracy in TV show or movies. History isn't always the most entertaining of things and so spicing things up a little makes it more interesting for the viewer. As I am no expert on Renaissance Italy, I also wouldn't be able to actually tell you whether most of the things portrayed actually happened. What I can tell you that this portrayal of the Borgia family includes lots of blood and violence as well as nudity and sex - so basically what you would expect reading about the family. Considering that the Borgia tend to be considered the worst of the worst of Italian Renaissance families, I guess much of the stuff actually happened - or at least contemporaries of theirs want us to believe they did.

There are three seasons of this show with about 38 episodes (depending into what length each episode was cut in the different languages). I did enjoy watching the very first season though my interest faded out half way during the second season and I never got around to the third one. Why? I think all the violence and nudity simply got too much for me. I don't mind it if it furthers the storyline, however, it started to feel like they just wanted to get another bare breast or stabbed person simply for its own sake.