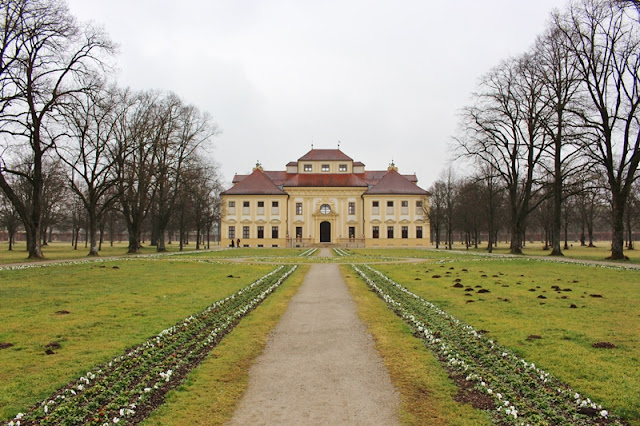 In addition to the old and new palaces, there is a third, much smaller palace located in Oberschleissheim. Located across the gardens, it is not called middle palace despite being built after the Altes Schloss and before the Neues Schloss. Schloss Lustheim, a maison de plaisance, was commissioned by the young Elector Max Emanuel, who also built the new palace, in June 1685 to celebrate his marriage to Archduchess Maria Antonia of Austria, the eldest daughter and only surviving child of Holy Roman Emperor Leopold I and his wife Margarita Teresa of Spain.

Court architect Enrico Zucalli came up with the plans for the the hunting lodge and garden palace. Located about 1300 metres from the Altes Schloss, Zucalli based his design on the Italian casino buildings popular since the early 16th century. Schloss Lustheim was to form the centre of its own gardens as well as a point de vue from the old palace. While there weren't any concrete plans for the new palace yet, it is clear from Zucalli's plans that they already had something in mind. 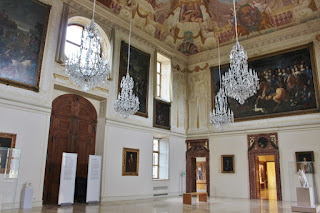 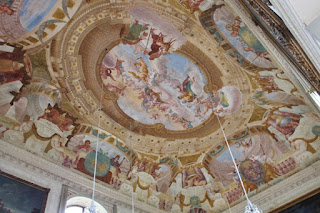 The brick shell of the palace was built very quickly. In comparison to the other palaces of Schleißheim, it is a rather small one. It's centre is a large festival hall. In addition, there are apartments for both the Elector and Electress and servants halls up- and downstairs. The small hall right at the top above the roof of the middle tract was specifically requested by Elector Max Emanuel, who enjoyed the view of the surrounding nearby woods and countryside from there. The ceiling paintings of Schloss Lustheim portray Diana, the goddess of hunting.

Originally, the walls of the rooms in the apartments were covered with damask in various colours but none of it survived the 18th century. Another thing that did not survive were large colonnades forming a semicircle to the east behind Lustheim, which were begun to be build at the same time as the palace. They were supposed to connect two pavilions to the north and south with Schloss Lustheim. After Max Emanuel's death, they, however, fell into ruins and were demolished in 1741. Today, the palace houses a museum for Ernst Schneider Foundation's Collection of Meissen Porcelain, a collection only rivalled by the one in Dresden's Zwinger.


Good to know:
The three palaces of Schleißheim (Old Palace, New Palace and Schloss Lustheim) are open April to September between 9am to 6pm as well as October to March from 10am to 4pm except for Mondays as well as January 1, Shrove Tuesday, December 24, 25 and 31. Schloss Lustheim is a nice little one, though you should enjoy some porcelain if you visit. I suppose the walk across the garden is much nicer in spring, summer or fall. Admission for Lustheim is 3,50 euros; for all three palaces combined, it's 8 euros. For more information, have a look here.
Bavaria Germany Munich Open Park Wittelsbach