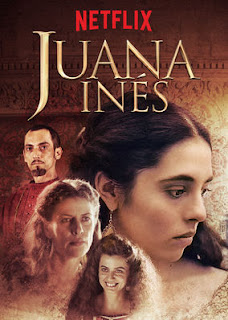 One of the great things about Netflix? It gives you the opportunity to watch foreign series you otherwise wouldn't - and thus also gives you the chance to learn about amazing women you hadn't heard of. Case in point: Juana Inés de la Cruz, a self-taught scholar, philosopher and poet and Hieronymite nun living in 17th century Mexico, at the time known as New Spain. Born out of wedlock, she learned to read thanks to her maternal grandfather and his love for books. During her teenage years, her intellect quickly gained renown in society and Juana Inés Ramirez de Asbaje became a lady-in-waiting in the court of the Spanish viceroy.

The later left the court in favour of life as a nun, the only chance for a woman of her birth to secure the time and resources for scholarship. Her life as a nun, however, didn't look like you might expect it to. The rules of the Hieronymite order gave her the chance to read and write as much as she liked and so her library, which contained more than 4,000 books and was considered the largest in all of Mexico, became the intellectual hub of Mexico City. The viceroy of New Spain at the time and his wife became Juana Inés' patrons and the relationship between the nun and the vicereine leaves room for much speculation with Juana Inés once writing her, "That you're a woman far away is no hindrance to my love: for the soul, as you well know, distance and sex don't count." 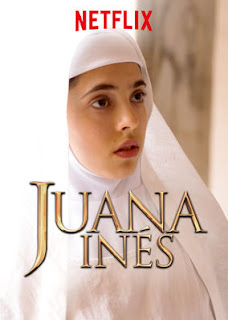 A feminist before the word even existed, it, however, wasn't her love letters to the vicereine that brought about her downfall but La Respuesta. In a private letter published without her permission, Juana Inés offered another view on theological questions, something forbidden for women at the time. In response to her critics, she then penned Respuesta a Sor Filotea de la Cruz or Reply to Sister Philothea. In her reply, she turned around the logic used by the Catholic church to justify her oppression and subverted it into a defense for women's intellectual rights and education. Though the tone is superficially humble, Juana Inés insisted that women have a natural right to the mind. Threatened by the Inquisition, Juana Inés de la Cruz was silenced for the final three years of her life. At age 46, she died after taking care of her sisters in an outbreak of plague.

The mini-series Spanish-language "Juana Inés", produced by Canal Once TV and currently available on Netflix with English subtitles, is a dramatisation of this fascinating woman's life. Sadly, history has a way of letting brilliant women disappear as unknown. Thanks to the aforementioned viceroy and vicereine, who had her works printed and published in Spain, much of Juana Inés' words and thoughts remain. The mini-series is a wonderful introduction to her story Though I have some doubts about the historical authenticities at some points, it does include marvellous costumes, authentic settings and two wonderful actresses portraying Juana Inés throughout her life and the many obstacles she had to overcome - or as she says at one point in the series, "My only sin has been to be a woman in a world of men."